Fifty years of children’s pantos is why the show must go on... 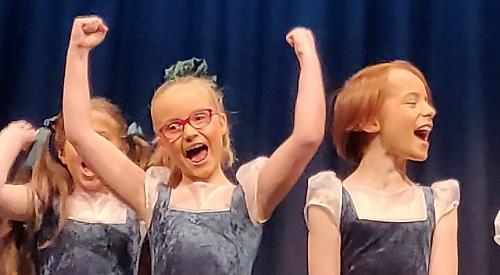 IF ever there was a fitting testament to Henley Children’s Theatre’s reputation as the grande dame of family entertainment, it was their wonderful feel-good pantomime Puss in Boots at the Kenton Theatre.

The show marked fully 50 years that the company has thrilled Henley’s child performers and audiences of all ages.

Many families in the town have been attending the HCT’s annual panto for generations.

Five-year-old Alice sitting next to me is a first-timer, excitedly sporting a light-up ring bought in the foyer. What’s she looking forward to the most? Puss!

Happily for Alice, Puss doesn’t disappoint — our feline hero was purr-fectly played with charming flair by both Bea Adam and Ethan Bentley (the cast is split into two groups who perform alternate shows).

The scene opened with a hiss-terical joke at the audience’s expense as the young compère (Theo Good and Lilia Taylor) welcomed us to the show, only to be met by a hidden heckler (the side-splitting Evie Crowther and Frankie Moore) shouting “It’s not natural!” [for a cat to wear boots] and repeatedly questioning the size of the giant — before the compère summoned “security” to hoist said heckler over his shoulder and frogmarch them out. The audience was by now delightedly panto-ready. Oh yes they were!

The unfolding story has it that principal girl Jesse (played equally warmly and deftly by Izzy Hubbard and Ella Chambers) is in love with the feckless and obscenely vain Prince Georgeous (elegantly portrayed by Ruby Marshall and with comedic panache by Thomas Horsley), but knows his mother Queenie (the haughtily hilarious and most “wegal” Capucine English) won’t let her, as an impoverished nobody, marry him.

Jesse’s father dies and the Mayor (Tilly Adam and James Edwards) announces that he is only leaving her in his will a silver coin and a flea-ridden cat — but one with a fur-midable secret. This Puss can talk!

Not only that, Puss has history with the evil, flatulent, Mexican-hating Giant Trump (Louis Van Der Mark and Daisy Carter doing a bigly great job with an American accent and cheerfully eliciting boos from the audience).

Trump — cue loud farting noise — had used villainous magic to turn the then rich landowner the Marchioness of Carabas into our hero cat and to steal their lands and castle.

Puss has a plan to defeat Trump and help Jesse win the hand of Prince Georgeous through a series of tricks — and ultimately to restore Puss’s own real identity.

Trump’s servant Igor (Theo Good, Woody Hamilton Hurst) is delightfully revolting and, from the titters in the audience, a firm favourite with the children.

An endearing trio of peasants (Emma Sage, Sophie Barrows and Abbie Stimfig, and Lottie Maxwell, Kitty Howett and Holly Edwards) are shuffled on and off stage throughout, and are a delight in their grotty, jaded dimness.

Alongside these characters, and at the heart of what is so special about HCT’s panto, are the chorus lines of young singers and dancers.

The Surplus Knights and the Villagers delivered a polished stream of old favourite numbers that roused the audience to hearty clapping, while the adorable Sophistocats and impossibly cute three-year-old-plus Fleas steal the show with their erratic tap routines, costume-fidgeting, slipping headbands and combination of wide-eyed awe and heart-swelling glee.

A solo song by Phoebe Edney in one cast, and a duo by Tilly Fennell and Billie Gadsdon in the other, were completely heart-melting.

All these young performers embody all that is so remarkable about Henley Children’s Theatre — music, merriment, camaraderie and joy.

The compère warned us as the beginning of the show “never work with children and animals” — but this children and animal-stuffed panto, celebrating family, fun, tradition and community, is exactly as it should be — impurrfectly perfect, and deliciously enjoyable.

I turn to Alice at the end of the show once the cheers and clapping have died down, and ask her what her favourite bit was.

She shuffles on her booster seat before announcing with a big grin “all of it.”

What better review can there be for Henley’s own children’s theatre. I can’t help wonder if I might see Alice up there on stage next year.