Village panto director has risen through the ranks 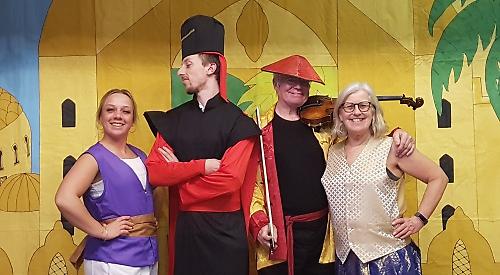 THE director of this year’s Shiplake pantomime can’t wait to see the show take to the stage next week, writes Matthew Wilson.

Henry Loud has been a member of the Shiplake and Dunsden Dramatic Organisation, aka SHADDO, since 2006.

He started off in chorus roles before moving to work backstage, eventually becoming stage manager.

But this year’s show — a production of Aladdin written by Ben Crocker — marks his first as director.

Henry said: “I’m really excited to direct for the first time. It’s something I’ve wanted to do for a while but up until now I’d always had something else stopping me from doing it — exams, moving house, more exams, and so on.

“We have a fantastic cast of people, both onstage and off, and I’m so proud that they’ve trusted me to direct this year. Rehearsals are going well so far, and currently we’re building the stage extensions and all the scenery we will be using.

“It’s all starting to come together but I’d be lying if I said I wasn’t a bit nervous as there’s a lot of things that can go wrong — though in all the years I’ve been involved nothing major has, so fingers crossed!

“Outside of SHADDO I work in retail. You couldn’t get much further from theatre if you tried, but it proves just how inclusive am-dram is that you don’t need any qualifications to take part!

“This is part of why I enjoy it so much — we have a large group of all ages and all different backgrounds and are always open to new members.”

Aladdin is playing at Shiplake Memorial Hall from Thursday (January 23) to Saturday, January 25.

Evening performances start at 7.30pm and there is a matinée at 2.30pm on Saturday.

A spokesman for the show said: “Join Aladdin for a fun-filled magical adventure as he bids to save the beautiful Princess Jasmine from the clutches of the wicked Abanazar. Expect all the traditional panto ingredients — toe-tapping tunes, a laundry-full of laughs, loads of audience participation — and a very, very badly behaved panda.”

Tickets vary in price by performance and are on sale from outlets including Shiplake Corner Shop and Binfield Heath Post Office.