Comedy newcomer has a fresh perspective on stuff 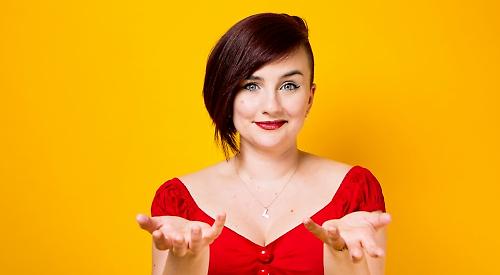 BRITAIN’S Brexit wars may be in abeyance for now, but the world still seems a furious place — whether we’re talking about climate change, gender, plastics in the sea or the question of whether we should be aiming for the future or the past.

Despite decades of social progress, it seems harder than ever to be a good person these days.

Thankfully, help is at hand — in the form of comedy newcomer Laura Lexx, who is bringing her debut touring show, Knee Jerk, to Norden Farm Centre for the Arts in Maidenhead next month.

Maybe Laura is projecting, but is all this arguing and fighting down to the fact that we’re scared witless?

In Knee Jerk, Laura uses the tricks she learned to cope with her eco-anxiety to try and soothe the world’s temper and calm down our various phobias.

Naturally, she has a laugh along the way, taking on many of society’s big issues — social media, mental health, carbon emissions — and posing such tricky questions as can you change the world without offending anyone? Can we stop being terrified and start being nicer to each other? And can you use netball to solve the gender pay gap?

By Laura’s own admission, there are more jokes than answers in the show, but it’s always good to get a fresh perspective. Isn’t it?

Knee Jerk might be Laura’s first tour, but she has enjoyed two years of sell-out Edinburgh shows and starred on Live at the Apollo while being named “Best Performer” at the Comedians’ Choice Awards in 2018 and 2019.

Having previously supported the likes of Jason Manford, Tim Vine and Russell Kane on their UK tours, it’s safe to say she has paid her dues and learned her trade.

“Warming audiences up is a real lesson in putting your ego firmly to one side,” says Laura. “It isn’t about you or about your act or material, it’s about making the room feel warm and happy without anyone really noticing you. It can be quite hard but it’s satisfying when you do it well.”

That she has been, with the Daily Telegraph’s reviewer hailing “the birth of a bouncy, bubbly stand-up star”. But how did Laura first discover her talent for comedy?

“Painfully slowly,” she says. “In front of audiences over five or six years of being intermittently brilliant and very disappointing. I always liked being silly but I slowly learned how to make that more of a precision tool.”

First impressions are vital in any business, and that is certainly true of a comedian who inspired Laura when she was growing up.

“Within the world of comedy, I still love Eddie Izzard an awful lot,” she says. “I just found him so charming and funny and interesting and he was my first experience of what comedy was. I also really love people that wrap more social stuff into their work — the Stephen Frys of the world who take their fame and reach and apply it to other things.”

With her show at Norden Farm on Wednesday, February 5, being the first stop on a 24-date UK tour, it’s clear from speaking to Laura that she is raring to go.

“I think they can look forward to someone who has really got to a fantastic place as a live performer being given a longer leash to stretch her wings,” she says. “I’ve had a cracking few years on the circuit and in Edinburgh, winning awards and nailing gigs and now I get to have a lot more stage time to play with and to really construct something I’m proud of — I’m really excited.”

If that tells us what to expect, how does she find the process of actually writing her shows? Is hers a disciplined “sit at your desk” approach or does she prefer to wait for the lightning bolt of inspiration to strike?

“A bit of both. I think it’s important to be firm with yourself sometimes and to sit and just write anything until the inspired bit comes out. But equally there’s no point flogging a really sad horse — animal-friendly phrase — when there’s probably something more constructive you could do with your time than being mad at yourself.”

One reason Laura is looking forward to starting her tour in Maidenhead is that if fate had dealt her a different hand in the past she could have grown up in the town.

“I very nearly moved to Maidenhead as a child when my dad changed jobs,” she says. “My life would have been very different had I moved there and not done all my growing up in Somerset!”

Laura’s dream location for a comedy gig is a little further afield, but probably reflects the success she has enjoyed in Edinburgh.

“I really would love to go to Canada and do the Montreal Comedy Festival,” she says. Maybe she’ll see Prince Harry there...

Laura is no stranger to radio and TV work, but what would she choose as her specialist subject on Celebrity Mastermind? “The film While You Were Sleeping,” she laughs. “It’s a masterpiece.”

• Tickets for Laura Lexx’s show at Norden Farm are £12. For more information and to book, call the box office 01628 788997 or visit www.nordenfarm.org