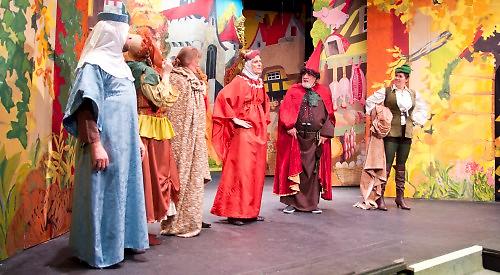 AN excited audience of all ages gathered for the opening night of the Sinodun Players’ 2020 pantomime, a fusion of the Robin Hood and Babes in the Wood stories, scripted by Alan P Frayn and impeccably directed by David Simmons.

We are drawn in from the first moment, since the announcement to put away your mobile phone comes by decree of the Sheriff of Nottingham!

The production exudes olde worlde charm — with monks, minstrels, archery and plenty of hey nonny no!

Leather-clad Adam Brimley is commanding as the ruthless Sheriff of Nottingham, attracting all the boos and hisses of the audience.

The band has two aims — to steal from the rich to give to the poor and to rescue Maid Marian (Ellie Tandy) from the clutches of the wicked sheriff.

This production gives the audience lots to laugh about, in the form of puns, jokes, knockabout comedy and bear hugs from the pantomime bear.

Add a joyful, jazzy set design along with tremendous singing and dancing and you have a show full of verve and good humour which is sure to please.

The whole cast and crew have clearly put their heart and soul into this happy production, which is the perfect antidote to the January blues. Go see it!