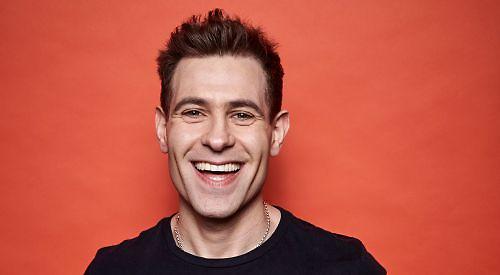 YOU’D think nothing would scare comedian Simon Brodkin any more.

This is the man who sneaked into the Conservative Party conference and handed Prime Minister Theresa May a P45 redundancy notice mid-speech with the words, “Boris asked me to give you this.”

Then there was the time he threw golf balls with swastikas printed on them on to the fairway in front of Donald Trump.

Yet even with that track record there is something that Brodkin reveals scared him more than doing all of his audacious stunts.

“Try telling your Jewish mother you’re giving up being a doctor to become a clown!”

And now the funnyman is doing something even scarier than that. After 13 years as a character comedian he is now standing on stage and being himself rather than pretending to be his most famous comic creation — cheeky diamond geezer Lee Nelson.

“It felt that now it’s right that I want to say what I really think,” he says. “I felt ready for it. I think part of that in the past was not feeling completely comfortable in my own skin. Like most men, I’m not really comfortable about opening up.”

His hilarious new show is called “100% Simon Brodkin” — but before premiering it at last year’s Edinburgh Festival Fringe, where it garnered excellent reviews, he initially toyed with a different title.

“I thought of calling the show ‘Debut’ because that’s how it feels. It was like learning a whole new set of performance skills.”

Brodkin can’t wait to see what his audience is like on his first national tour as himself.

The show visits Norden Farm Centre for the Arts in Maidenhead — where Theresa May is the MP — on Saturday, April 18.

In his show he talks entertainingly about his real life. He discusses growing up in north London and being a rubbish dad who, he confesses, lets his wife do all the work bringing up their two children. He also chats about his brief medical career, although maybe not all of the material is 100 per cent true to life throughout.

“I remember a guy who fell into a canal and nearly drowned, but I put him in a bowl of rice,” he chuckles.

Brodkin touches on antisemitism, masculinity and spills the beans on being the “stunt dude” who pranked the future US President.

Looking back on those headline antics he seems to like to terrify himself. “The scarier it is, the funnier it is — in hindsight,” he laughs.

He can smile about the Donald Trump incident now, but at the time his fear was that Trump’s security might get their hands on him.

Luckily, the Scottish police dealt with the matter. “They drove me to Glasgow airport, gave me a flight back to London and told Donald Trump they had deported me.”

He has few regrets about those gatecrashing tricks. Not even the one which predicted Theresa May’s demise and her subsequent successor.

“You wouldn’t be doing stunts on those people if you felt bad about it. You don’t think, ‘The poor Donald Trump and the leader of Britain.’ I think if you do feel sorry for someone for doing it, you’ve picked the wrong person.”

Brodkin says that the person that he is now on stage in jeans and a
T-shirt, talking about being a hapless husband and always playing the fool is very much the genuine article. “I’m not a serious person and everything I do is knockabout, whether it’s with mates or with family. My wife did really visit America and I did kind of go, as I say onstage, that the week she was away I realised that behind my back for the last nine years, that she’d being doing all the childcare.”

He has always been a joker, but it did not occur to him that he could pretend to be other people professionally for a long time.

“I originally wanted to be a vet. That’s my big regret. I wish I was still saving squirrels now!”

He opted instead for treating humans. “Then I saw Sacha Baron Cohen doing Ali G on television. I thought to myself, I do that when there are no cameras about. I was the bloke who wound everyone up.”

It was through winding everyone up that he met his wife. “We would all be going out and drinking far too much and being silly and I would pretend to be other people. The night I met my wife I think I was Spanish pretty much the whole night. She thought I was from Barcelona and I had to reveal I was English the next day.”

As for his parents, who used to be solicitors, he admits that maybe he was not being 100 per cent truthful when he says he was scared about telling his mother about his career change.

“The truth is they were fine about it. My dad’s super-chilled. I could have told my dad I’m giving up everything and going and living a solitary life in Borneo and he would have been like, ‘Cool.’”

As for Lee Nelson, maybe comedy fans haven’t seen the last of him after all.

“He’s currently spending time in a youth offenders’ institute and depending on good behaviour he may or may not get out sooner rather than later,” suggests Brodkin.

We may not have seen the last of Brodkin’s stunts either.

“There’s always more to be done and there’s always fun to be had doing that, but this new show is taking up the time at the moment.”

He still sounds as if he has one eye on the ever-shifting political landscape, saying: “If there’s the opportunity, of course…”

For more information, including a full list of tour dates, visit www.simonbrodkin.com