Memorial hall panto had every ingredient in place 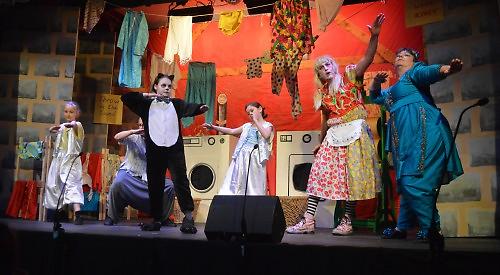 COME the end of January each year, there are two things to look forward to. One is the Six Nations and the other is the annual Shaddo pantomime at the Shiplake Memorial Hall.

This year, Shaddo put on Aladdin. The anticipation was heightened when Radio Berkshire announced that one of their colleagues had been to it on the Thursday night and that it was “well above the standard of an amateur dramatics production” and, if tickets were still available, well worth going to see.

Entering the hall, there was an immediate feel that we were travelling back in time, to a mysterious Eastern land, as the entrance hall had been transformed into a Bedouin tent. Various Chinese banners were hanging around the hall and they had genuine Chinese greetings and sayings drawn on them courtesy of Ricky Knights Wai, who was celebrating the Chinese New Year.

Every good pantomime must have a great baddie, an energetic principal boy and a larger than life dame, and these were very much present in this production.

Simon Classey as the evil Abanazar maintained a great degree of evilness throughout and was masterful in the way he dealt with the hecklers with such humour. His Bohemian Rhapsody duet with Princess Jasmine was superb, with the new lyrics quite inspired. Ellie Classey, as Aladdin, showed great energy and mastery of the role and maintained her character throughout the production.

The dame was played by Mark Manson, who made the role his own with some current affairs ad libs — including a princess disappearing off to Canada — keeping the audience entertained throughout. All three actors deserve credit for the way they kept up the pace of the pantomime.

The production was colourful, with some great props and scenery and very well managed.

The evil blade swinging over Aladdin had a hint of a James Bond film about it, while the shrinking, stretching and fluffing of the panda kept the children guessing how it was done.

Overall, this was a great evening with something in it for all ages.

Several youngsters who have been part of Shaddo in the past have gone on to study theatre at university and are now making their way in the profession as designers and actors.

So if you have never been to one of their productions, I would strongly recommend you come next time. As Radio Berkshire said, they are well above the standard of an amateur production.