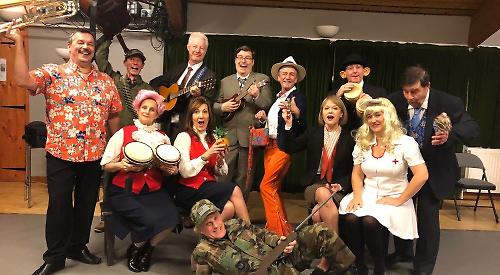 A DINNER-theatre production of the classic BBC sitcom Are You Being Served? will have a more than usually authentic feel — after the TV show’s set designer and builder heard about the show and got involved.

Monica and Keith Ackland-Snow were put in touch with director Julie Huntington after their artist daughter Frances approached the Henley Amateur Operatic and Dramatic Society (HAODS) to hire some costumes.

Julie said: “Frances came to hire some costumes for a charity collaborative art session she was doing in London late last year.

“Anyway, she was chatting, saying ‘Oh, what’s your next show?’ and I answered that it was Are You Being Served? Talk about serendipity.

“She’s leapt in the air and said ‘My mum and dad were the original designers on that show!’ She got me in touch with them straight away, and we met, and her mum did some drawings for us.

“Unfortunately her mum doesn’t drive and her dad’s had an accident and injured his foot, so they can’t be any more involved than having just helped us with a bit of design — but it’s been invaluable.

“They came to Henley for the day and we met at Phyllis Court and had lunch. Then I walked them round to the HAODS studio and they saw the space that we had to operate in and went away and did some designs for us.”

The show opens on Wednesday (February 19) and runs until Saturday, February 22, at the studio venue next door to the Kenton Theatre in New Street.

With a cast of 12, audiences should prepare themselves to be reunited with such immortal characters as Captain Peacock, Mrs Slocombe, Mr Rumbold, Miss Brahms, Mr Humphries and other inhabitants of the Grace Brothers department store.

Julie said: “It’s written by the authors of the TV series, David Croft and Jeremy Lloyd — the same two who wrote ’Allo ’Allo and Dad’s Army and loads of other TVseries as well.

“The show is a conglomeration of several of the TV episodes and the film. The first half they’re in the shop and then in the second half they go on a holiday which has been sponsored by the store to Spain — to a one star hotel — and they end up in the middle of a revolution.”

With catering by Stephen Luscombe from the Golden Ball in Lower Assendon, the starters and main course will be served before the show and dessert in the interval.

Tickets are £30. For more information and to book visit www.haods.org/upcoming-shows