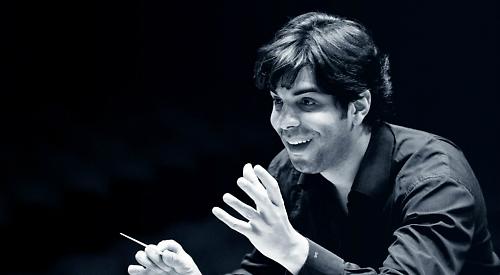 DOMINGO HINDOYAN is a musician of the world.

The violinist and conductor was born in Venezuela to a Venezuelan father and Syrian mother.

He trained in Europe and today lives in Switzerland with his Bulgarian wife, the opera singer Sonya Yoncheva.

On Sunday (February 23), the 40-year-old will be conducting the Royal Philharmonic Orchestra at the Hexagon in Reading from 7.30pm.

The programme will feature Beethoven’s Piano Concerto No.1 with Leon McCawley, Brahms’ Double Concerto for violin and cello, Tchaikovsky’s Symphony No.5 and Glinka’s A Life for the Tsar: Overture.

Hindoyan brings with him a special quality to his concerts with the Royal Philharmonic, having played under the baton of Daniel Barenboim for seven years and three years as his first assistant at the Staatsoper Berlin.

“Daniel Barenboim was and remains a huge influence on me and my music,” he said. “But of all the wonderful things he taught me, the biggest is never to play or conduct a single note without there being a great deal of thought behind it. Why did the composer write this note? What is its contribution to the music?”

Domingo may credit Barenboim with his musical curiosity but admits, too, that curiosity is a Venezuelan trait.

He said: “More than anything, we’re curious about our fellow Venezuelans and about the world. Venezuelan children want to learn everything but especially music. I would say that as football is to Brazil, so music is to Venezuela.”

Indeed, like many of his friends, as soon as he was old enough, he joined Venezuela’s famous El Sistema music education programme where he played in orchestras.

In the evenings he had lessons with his father, also a violinist who had studied at the Juilliard School in New York and a former president of the Orquesta Sinfónica de Venezuela. Aged 19, Domingo took his first steps as a world musician when he left Venezuela for Europe where, he says, he experienced new repertoire that “refined” his playing.

He said: “At that time, there was very little opera, Baroque and early classical music being performed in Venezuela so hearing it in Europe made a huge impression on me.”

His concerts this month will be the first time Domingo has conducted the Royal Philharmonic.

“Meeting an orchestra for the first time is all about chemistry,” he says. “You have to establish a working relationship immediately. It’s all about respect and giving the musicians space for spontaneity but without altering your concept of the music.”

Domingo is looking forward to conducting the programme.

He said: “I love Tchaikovsky’s Symphony No.5 and know it well. Glinka’s overture for A Life for the Tsar is rarely played but will sit alongside it very happily. No one can fail to love Beethoven’s Piano Concerto No.1 and of course, I know Brahms’ Double Concerto intimately, having played the violin part in concert myself.”

Tickets for Domingo Hindoyan and the Royal Philharmonic Orchestra are £17, £24 and £28 with concessions available from the box office on 0118 960 6060 or www.whatson
reading.com