Stakes are high in musical of love and New York underworld 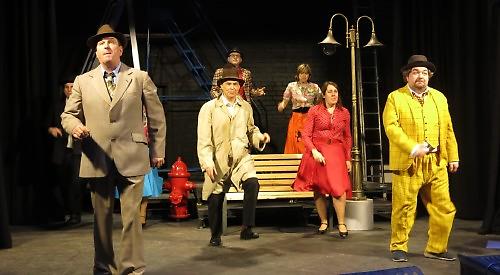 A PRODUCTION of Guys and Dolls is being staged at the Corn Exchange in Wallingford from March 10 to 14.

Considered by many to be the perfect musical comedy, this award-winning classic gambles with luck and love.

To settle a bet, high-rolling gambler Sky Masterson pursues straight-laced Sergeant Sarah Brown, only to fall head over heels for her.

Meanwhile, lovable rogue Nathan Detroit is sweet-talking his fiancée of 14 years, Adelaide while he struggles to find a venue for his illegal dice game.

After their sell-out production celebrating the music of Richard and Robert Sherman, featuring a full-size replica Chitty Chitty Bang Bang car, back in 2016, Crescendo Music returns to stage Guys and Dolls, which is now celebrating its 71st year.

This production will showcase local talent, under the expertise of professional musical director Rob Alderton and director Marilyn Johnstone. The duo first worked together at the Corn Exchange in the Eighties and Marilyn continues to direct and act.

Rob’s first job some 30 years aged 14, was as a pianist at the Corn Exchange and since then he has played for many musicals in the West End and on UK tours.

The performance will be a high energy riot of dance and features all-time favourites Luck be a Lady, Guys and Dolls, I’ve Never Been in Love Before, and the irresistible Sit Down, You’re Rocking the Boat.

It’s time to roll the dice and fall in love under the bright lights of Broadway.