Family feuds thrown out with the leftovers 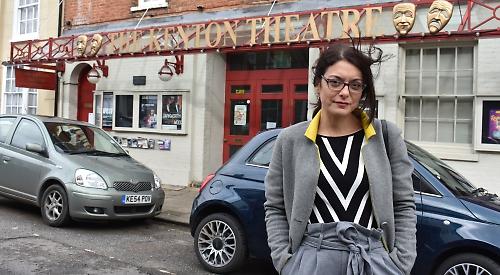 SUNDAY dinner with the family can be a joyous affair but at other times they can be a scene of intense powerplays, both spoken and unspoken.

The bigger the family, the bigger the potential for catastrophe but, like most families, once the dishes have been cleared away, the love they have for each other settles any differences.

This is perhaps Eduardo’s most celebrated work outside of Italy and has been performed by the likes of Laurence Olivier and Eli Wallach.

For Italian-born director Teri Zambigli, who lives in Goring, his works have a deep personal meaning for her as much of the themes he has written about reflects different stages of her life.

She is producing a documentary in which she interviews other directors and actors who have staged and loved Eduardo’s works.

Part of this project involves staging her own production of Saturday, Sunday, Monday, which will be performed by the Henley Players at the Kenton Theatre from April 1 to 4.

Teri says: “Saturday, Sunday, Monday is my childhood. In Italy you will have the whole family — a couple of 85-year-olds, your grandparents and great grandparents would all be there. Everyone would have an opinion on everything but also there would be the things they were not saying where they use facial expressions.

“The story is very simple, revolving around the tense dynamics of an extended family and friends before, during and after a Sunday lunch.

“In the first act, it looks as though the couple who are arguing hate each other but in fact they do love each other. They fight and they make this horrible war at the table but in the end they come to peace. The genius of Eduardo is that he creates great drama with characters who actually love each other.”

Teri, 41, who worked for 11 years in Italy as a stage actress, assistant director and director, came to England about 12 years ago and having had two children, she wanted to work with a theatre troupe who had not encountered Eduardo’s work.

She said: “I was looking for a theatre troupe that had never worked on Eduardo’s plays because I wanted to be able to study their reactions and the Henley Players have embraced the project and been very supportive.

“When we were reading through it they were all laughing out loud. You can see Eduardo in them. The funny bit for me is to try and explain to a British man that they need to move their arms and hands and be more expressive as it is the Italian way.

“They asked me if I wanted them to do it in an Italian accent but I didn’t want them to as its legacy is in English. I didn’t want their accents to detract from the words and actions of the play.”

Teri was first introduced to the work of Eduardo as a child when she was taken to see his Christmas plays. Then, aged eight, her father, who taught philosophy at university, took her to one of his classes.

She said: “My father showed his students a piece by Eduardo. I can’t remember the concept he was teaching but I understood that it was important. He had given me a piece of paper and a pen but instead of making a drawing I listened.

“My father has all the tapes of Eduardo’s works at home and I used to go to the theatre a lot to watch how the actors behaved. After watching his works I felt I could understand other playwrights easily.

“I have directed three or four of Eduardo’s plays. He is seen in Italy like Shakespeare is here. I think that the best playwrights are human, which is why we love them. I am sure even though he is an Italian man, if you, as a British man, came to see it you can watch it and say ‘that’s me’.”

Interviews with the Henley Players will feature in her documentary, which she has called Pane ed Eduardo (Bread and Eduardo) after an Italian idiom indicating the mental nourishment and influences which contribute to one’s growth.

It is a personal view on Eduardo’s legacy in the UK and Teri hopes to get across the enthusiasm actors have for him. She hopes to finish it by June.

Teri will include several other plays, which she says reflects different stages of her own life. She said: “For me Man and Gentleman (Uomo e Galantuomo) is the most beautiful play he wrote. It is about behaviour. There are social differences between the man, a commoner, and a gentleman but they behave the same way in the same situation. It is a play that knocks down the social barrier.

“The very feminist Filumena Marturano follows a girl who was forced to become a prostitute during the Second World War and fell in love with a rich guy in Naples. He cared for her but did not marry her.

“Even though she ran his house, she didn’t get the status that came with it so then she tried to make him marry her. She pretended to be dying and tricked him into marrying her. Afterwards she confessed and so he wanted a divorce.

“She then told him that she had used his money to send her three children he didn’t know about to boarding school. One of these was his son but she wouldn’t tell him which one.

“She didn’t want them to know who their father was or they would treat each other differently. So it is a play about love and that marriage isn’t such an important thing. You can raise your children on your own.

“Then Inner Voices (Le Voci di Dentro) is about misunderstanding what people say and the difference between dreams and reality. When you dream something so well you think that it is real and, despite denials, they too begin to believe it and start accusing each other.”

She added: “Eduardo’s plays are funny and totally human. There are two levels to them. One is comedy — they are really funny — but there is also a dramatic level of deep thought about the meaning of life and why we are here but it is done in a humorous way. An audience will recognise themselves and others and see parts of their own life.”