Queen musical cements the band’s status as kings of rock 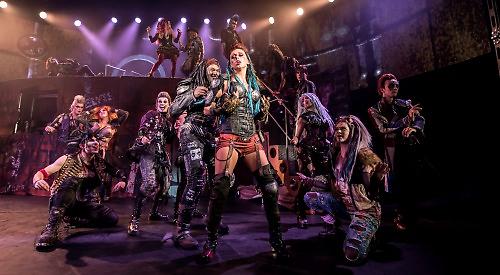 We Will Rock You | New Theatre Oxford | Monday, March 2

YOU could pick some holes in the plot, maybe take issue with the characters, but in the end they’re just footprints in the sand washed over by the tide of Queen music.

It comes at you loud, proud and undiminished by time — hit after brilliant hit. Queen were the last of the great kings of rock, probably its crowning glory, and everything this musical does reflects that.

Yes, it’s a jukebox, but what a selection! Ben Elton wrote the script and it’s been updated since the 2002 original, but really it’s there to fill in the spaces between the songs.

Even so there are some great moments and with a plot more relevant than ever — we’re on an I-world where the entire population has been absorbed into a digital server which could be Google, Microsoft, Facebook or whatever’s coming next.

Independent thought is banned but a few rebels hold out, the last bearers of the rock and roll flame.

Enough of that, let’s hear that definitive Brian May guitar! And we do, note perfect from James Barber and Simon Croft. And who’s playing Freddie? Ian McIntosh, and he gives Adam Lambert a run for his money.

The singing roles are spread through the cast but McIntosh and Elena Skye take most of it and have a chemistry both in the songs and the dialogue. Special mention goes to Michael McKell as Buddy; his comic timing is exquisite.

The action keeps moving with the help of a constantly changing video screen and lots of sexy dance routines.

But the star of the show is the music itself — some of the most powerful and inventive rock music ever created.

Queen brimmed over with talent and intelligence and this almost religious homage to them only enhances their reputation.

By the way, Bohemian Rhapsody is not in the main body of the show, but it’s tacked on to the end — how could it be left out, after all?