Comedy of crossed wires has human nature on the menu 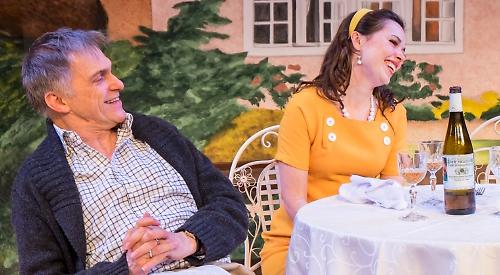 WE’RE in the mid-Sixties, a little before the swinging has really started. An average job gets you £16 a week, phone numbers have four digits, and a couple living together are doing something slightly risqué.

Greg and Ginny share a small flat in London. They love each other but haven’t been together very long. Greg is quite innocent. Ginny’s been around a bit. Greg wonders who is sending her flowers and boxes of chocolates.

In particular he wonders about the owner of the pair of men’s slippers he discovers under the bed. But he can’t ask too many questions because Ginny is about to depart to leafy Bucks for a quick Sunday trip to visit her parents — apparently.

Cut to the garden of Philip and Sheila’s nice house in leafy Bucks. Unlike the young couple these two have been together for years. They’re fond enough of each other but Sheila suspects Philip might be having an affair, and vice versa.

Into the garden steps Greg. He’s got down to the country before Ginny. He’s there to announce his intention to marry her. The trouble is that no one seems sure what or who he’s talking about.

This is the set-up for Relatively Speaking, Alan Ayckbourn’s first big West End success, first staged in 1967 and now revived in a highly entertaining production at the Mill at Sonning, a theatre venue which is unique in that a meal is provided as part of the ticket price.

Like many other plays from Ayckbourn’s considerable output, Relatively Speaking turns on strained relations between couples and within families, on misunderstandings, mistimings and crossed wires.

Mostly the resulting confusions are played for comedy but there can be an undertow of sadness, even tragedy.

It is extraordinary how much mileage Ayckbourn gets out of having only four characters on stage. In fact it’s usually only two at a time, frequently talking at cross-purposes. And how much mileage, too, he gets out of simple props. Those men’s slippers which featured at the beginning are the prompt for a very neat twist at the end.

Director Robin Herford has a long association with the playwright, and it bears fruit in this affectionate and well-received version.

Christopher Bonwell makes a good — that is, rather gauche — young Greg, while Lianne Harvey’s Ginny combines sweetness with Sixties savvy. Rachel Fielding as Sheila is the epitome of Home Counties grace and steel, while James Simmons manages to be both flummoxed and exasperated as Philip.

Like many fine comedies, Relatively Speaking seems to be spun out of nothing but, also like them, it has plenty to say about human nature.

The two hours on stage slip past very easily — and the dinner beforehand is pretty good too.