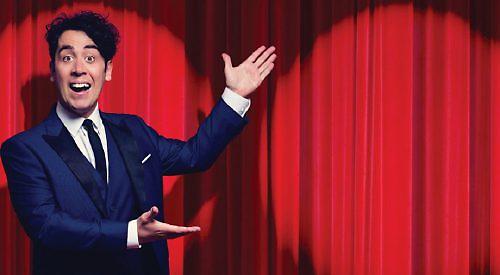 HE’S been hailed as “the new poster boy for British comedy magic” but Pete Firman isn’t afraid to share the limelight.

That’s why his new touring show, Pete Firman & The Amazing TBC, is arguably his most ambitious yet.

A spokesman said: “Pete is back on the road with a completely unique and hilarious new kind of magic show. Come and witness the first and possibly final performances of the world’s greatest magical double act.

“Every night Pete will be joined by a different special guest who has no previous conjuring experience, and together they will perform
jaw-dropping magic without any rehearsal. What could possibly go wrong?!”

The 25-date tour opens at Norden Farm in Maidenhead next Friday (March 13), and visits the Cornerstone Arts Centre in Didcot on Wednesday, April 8.

Pete said: “I’m thrilled to be back on tour with a different style of magic show. I’ll be placing my trust — and reputation — in the hands of some special guests with buckets of enthusiasm, but zero sleight of hand skills. Suffice to say we won’t be starting them off with sawing me in half.”

Back in 2017, Pete became the first non-member of the Magic Circle in the group’s 115-year history to be presented with the Carlton Award for outstanding comedy in magic.

He is also the author of a successful introduction to magic called Tricks to Freak Out Your Friends that was published on both sides of the Atlantic.

But when did Pete first discover his talent for magic?

“One of my presents as a child was a magic set and it was something I could do — which wasn’t true of all the presents as I also got a guitar and could not get the hang of it.

“I performed tricks in front of friends and relatives, then when I was 17, I got a job in a restaurant in Middlesbrough, where I grew up. They knew I could do magic and let me wander around the tables doing close-up magic to keep the people happy while they waited for their meals to be served.”

Any showbiz inspirations to declare?

“Tommy Cooper, though it was sadly after he had died, with the repeats of his shows on Tyne Tees Television when I was growing up.

Then Penn & Teller — I watched The Unpleasant World of Penn & Teller. It was different, edgy and as a double act it worked. Like many brilliant double acts, there is a difference in size, and indeed character between them.

“I was later lucky enough to meet Teller. Even before he met Penn he performed magic in silence — he wanted that challenge to be able to fool the audience without speech to distract them.”

On that note, which is harder — performing in front of a live audience or on TV?

“Definitely television, because you lose the spontaneity even with a live audience, and there is always that hurdle of people assuming you are relying on camera tricks despite all the precautions you take with single cameras and members of the audience all around. Essentially, magic is something that has been performed live for thousands of years — they have even found hieroglyphs depicting it — and that is the best medium for it.”

Given the long history of performance magic, is there a particular period that Pete would most love to go back to if he could? “I would really love to go back to the beginning of the 20th century — that was the golden age of magic and the exponents, people like Houdini, were top stars touring with huge entourages. We know about what happened then because of accounts from people that saw the acts, but sadly there is little footage.”

What can audiences look forward to with this new show?

“Me performing improvised magic with a surprise celebrity each performance — and they know nothing about magic, there’s no script, no rehearsal. What could possibly go wrong? I will be performing tricks and I will also guide the celebrity to perform tricks. It is a show I performed at the Edinburgh Festival and it went down well there.”

Lastly, does he have any advice for today’s aspiring magicians?

Pete Firman’s show at Norden Farm next Friday starts at 8pm and is recommended for ages 14 and up.

For a full list of tour dates, visit www.petefirman.co.uk