Talent show stars are swinging by 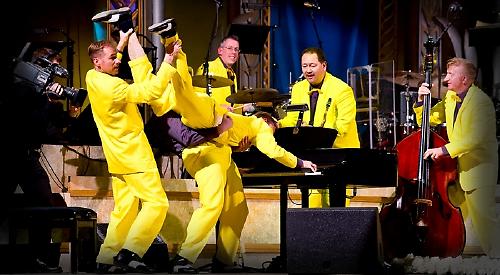 A BAND who reached the semi-finals of Britain’s Got Talent in 2012 are bringing their “Big Beat Revue” to the Mill at Sonning on Sunday (March 15).

Outfitted in their trademark yellow suits, The Jive Aces will be in concert from 8.15pm.

A Mill at Sonning spokesman said: “With classic tunes from artists such as Louis Prima, Bobby Darin, Keely Smith, Big Joe Turner and Ruth Brown, this show will have you out of your seat with its larger-than-life big beat sound.

Hailing from Billericay in Essex, the six-piece swing band have been performing live since 1989 — during which time they have released 14 albums and five singles. Although the Jive Aces predominantly play covers during their live shows, all six members have written songs for the band’s studio albums.

Some of the best known are La Dolce Vita, Ukulele Swing, Christmas Is Where You Are and London Rhythm, which was used as the theme song for Jo Good’s BBC Radio London show.

All the band’s albums feature some original tunes and their concept album Amazing Adventures — inspired by film noir and pulp fiction of the Forties and Fifties — is entirely self penned.