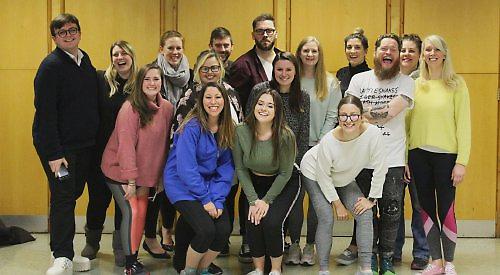 HORROR-comedy rock musical Little Shop of Horrors is coming to the Kenton Theatre next week courtesy of the Reading Operatic Society.

The group, whose previous productions at the New Street venue include Godspell and Annie, is staging five performances of the Off-Broadway hit from Wednesday (March 18) to Saturday, March 21.

Written by Alan Menken and Howard Ashman, the show has devoured the hearts of theatregoers for more than 30 years.

A meek floral assistant, Seymour Krelborn, stumbles across a new breed of plant he names Audrey II — after his co-worker crush.

This foul-mouthed, R&B-singing carnivore promises unending fame and fortune to the down and out Krelborn as long as he keeps feeding it — with blood! Over time, though, Seymour uncovers Audrey II’s out-of-this-world origins and intent towards global domination.

The show’s musical director Thomas Joy said: “Little Shop of Horrors is an absolute personal favourite, a brilliant, dark, fun show that you just can’t help loving. Rehearsals over the past few months have been a thrill. We’re working with a small 13-strong cast who sound absolutely incredible, as well as a stellar band, under the careful eye of director and choreographer Nicky Jaggar and assistant Delun Jones.

“I think a lot of people think of am-dram as this quaint village hall activity, complete with out of tune singing and rusty dance moves, but this production could not be further from that — we’ve got a whole cast of exceptional talent, both singing and dancing.

“Creating a dark modern Little Shop has been good fun. With the original movie and show set in the Seventies/Eighties, we’ve brought the action to the modern day and introduced some exciting new ideas, including the visions that Seymour has of the carnivorous plant that he’s growing come to life on stage. Combining that modern twist to a show that’s already laced with a dark, camp sci-fi plot has resulted in a show that is both funny and slightly scary, but also quite touching too as it deals with some of the intense elements of humanity, such as celebrity, poverty, love, and abuse.

“It’s also a gift of a show from a musical point of view. With Disney-favourite Alan Menken behind the score, the show ranges from Eighties synth rock to gospel and everything in between.

“Having seen the show several times myself, even if you’ve seen it before, I’d definitely recommend coming to see it — I think it might be the best chance to see the score performed so well and entirely for a while to come.”

Evening performances start at 7.45pm and there is a 3pm Saturday matinée.

Tickets for the opening night are £14 for all seats, while those for the Saturday matinée are £17.

Little Shop of Horrors has a running time of 120 minutes, including a 20-minute interval.