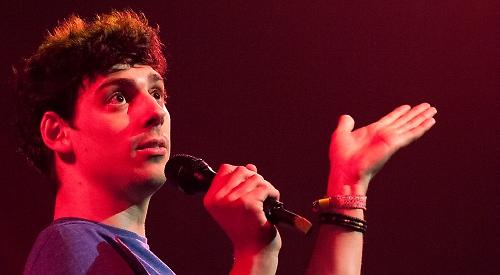 HE’S a star of radio and TV with a stand-up comedy career dating back to 2009 — and he’s still only in his late twenties.

But despite his many successes, Didcot-born Matt Richardson still feels like a showbiz imposter.

On the plus side, this anxiety has gifted him the subject — and title — of his new touring show, which he is bringing to Norden Farm Centre for the Arts in Maidenhead next Friday (March 20).

“Imposter” tells the story of Matt’s adventures in showbiz and television, and how he deals with the imposter syndrome that accompanies these worlds.

The 28-year-old doesn’t just feel like an imposter in showbusiness, he tells us, but in the business of being an adult in general.

The show is an hour of unrestrained, raucous laughs, where audience interaction and impromptu tangents mean anything can happen — promising a unique experience every night.

His comedy breakthrough came in 2010 when he appeared in the finals of So You Think You’re Funny and the Chortle Student Comedian of the Year. But looking back, when did Matt first realise he could make people laugh?

“I’d love to say I knew I was very funny way before I started to do stand-up and it was always my destiny,” he laughs. “However, the truth is that I’m still trying to discover it.

“When you very first start you’re pretty rubbish and it’s something that you have to put time into. Just when you think you’ve reached your peak, you manage to find another step to move up to. I’m funnier now than I was a year ago, I think, and I’ll be funnier again in a year.”

Growing up, who were his comedy inspirations? “I used to go and see Russell Howard a lot when I was a teenager, so definitely him. But my top comic to look up to has to be Greg Davies. I think he’s a master of the craft.”

Speaking of which, what can audiences look forward to with Matt’s new show? “It’s loads of new material, about growing up and settling down, with some stories about my slightly unusual life on the fringes of the public eye, with one or two of my old routines thrown in from my previous shows as a slight celebration of my decade in the business.”

Does he find his stand-up and
ad-libbing skills come in handy when it comes to TV presenting?

“I really think it does. I’ve done a lot of shows that require dealing with members of the public, and I think years on stage talking to them really sets you up for that. Live TV is such a different beast to stand-up but I’ve had to make up 10 minutes of a show after the autocue failed and there was nothing to prompt me. The one thing live TV and stand-up have in common are this — when it’s going badly time slows down to a crawl.”

No stranger to presenting celebrity-led reality TV shows, are there any that he would actually like to take part in himself one day? “I’d do Strictly or I’m a Celeb. But you know what? I think they’re becoming a really good way for audiences to be introduced to people like me, so any comic would be mad not to do them.

“A few years ago they were for people who needed to revive a washed-up career, but now they seem to launch the careers of people who are at the minor TV level like me — look at Joel Dommett or Chris Ramsey. I wouldn’t say no to some of that action. I think Joel drives a Ferrari now, so get me in that jungle!”

On the stand-up front, is there anywhere he would particularly love to perform? “I’d be quite keen to gig in America. I’ve filmed there lots over the years but I’d be really interested to see how my act goes down with their comedy club audiences. I’ve got a lot of routines I worry are far too UK-centric, and I am planning on world domination.”

With that in mind, what is the best piece of advice he has been given? “Be nice, even if you’re having a really bad day. I once saw a tweet from someone saying I’d been rude to them when I’d met them, which I was mortified about. But people really remember if you were polite or rude and it can come back to bite you.”

His nice guy credentials firmly established, Matt is looking forward to reconnecting with his Maidenhead audience next Friday.

“I’ve played Norden Farm maybe five or six times over the years, so it’s always a fun show with lots of familiar faces who come and say hello afterwards, which I absolutely adore. The fact people want to come and see me again and again is probably one of the nicest compliments you can get as a comedian.”

Having admitted that he feels like an imposter as an adult, if he could stay at a single age like Peter Pan, what would that age be?

“Around 21 or 22. You’ve broken into the world and feel like everything is in front of you and anything is possible but a lot of the reality hasn’t set in yet. And your parents are still happy to cover your rent once in a while.”