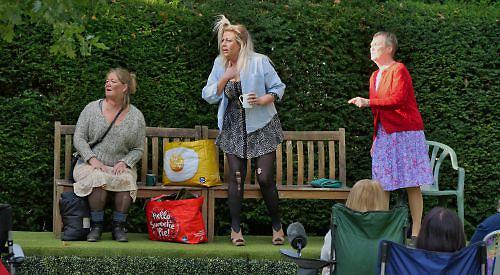 A Seat in the Park | Mill Green, Wargrave | Saturday, September 19

WHAT a treat it was to take my own seat to the park (Mill Green) and watch A Seat in the Park by Cherry Vooght.

The sun was shining and Twenties music was floating through the air as the superbly organised covid-secure front of house staff showed us to our clearly marked out, socially distanced area.

It was the first time in six months that I’d been in a theatrical environment and I don’t mind admitting that I shed a few tears when the performance started.

Tears of sadness at what has happened to the performing arts industry in recent months, but mostly tears of joy knowing that somehow theatre always finds a way.

Vooght’s play is a series of short scenes, set on the same park bench outside a public lavatory, that focus on the friendships and families of real, lived-in characters, each of whom is missing something or someone important from their lives.

The script calls for strong female performers and, my word, this Wargrave Theatre Workshop cast did not let us down.

Kudos to directors Ann Roberts and Clive Dow for allowing the actors licence to give believable and beautifully understated performances. We were totally drawn into each little world. We cared about each character.

A great reminder that sometimes strangers are just friends we haven’t met yet.

Bringing both humour and hard-hitting pathos, Grace Tye’s and Jenny Manning’s bickering bench buddies were superb. This scene was a highlight for me, especially the heartwarming moment when, although henpecked and belittled by her, Jenny’s “second lady” was still willing to continue accepting her friend’s fantasy.

Christine Christie and Celia Reinbolt brought great warmth as Rosie the bag lady and Agnes the toilet attendant as they enjoyed a birthday celebration whilst toasting their late friend with a few mugs of whisky.

Christine’s performance as Rosie was heartfelt and earthy, and Celia’s re-enactment of the various lavatory visitors was a real treat.

Special mention must go to the younger members of the company — Sophie Errington and Amy Ambrose — who, although playing supporting roles, deftly handled some difficult dramatic sequences.

As you’d expect from WTW, the attention to detail was spot on in every aspect, from the well thought out costume choices to the simple raised set and subtle sound design. This play was poignant and certainly relevant as we adapt to this “new normal” way of living. Now more than ever we need family, friendship and togetherness.

Thank you to WTW for a wonderful and thought-provoking afternoon of much needed theatre.