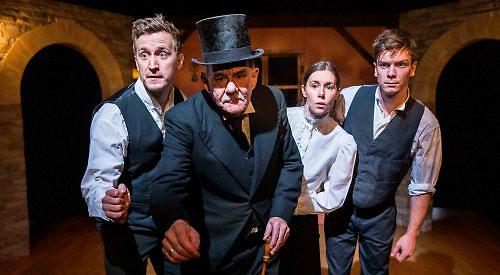 IT is perhaps the best known of all Christmas stories, second only to that of Jesus, Mary and Joseph, writes Matthew Wilson.

First published in 1843, Charles Dickens’s A Christmas Carol has been filling readers and theatregoers with a festive glow for more than 175 years.

Now the classic tale of Ebenezer Scrooge has been chosen for this year’s Christmas production at South Hill Park in Bracknell.

A spokesman for the Ringmead venue said: “Scrooge is the meanest, most miserable man in London. He only cares for one thing — money. Of all the people and things Scrooge dislikes, he hates Christmas most of all. One Christmas Eve, Scrooge is visited by the ghosts of Christmas Past, Present and Yet to Come, who attempt to show him the error of his ways and teach him to become a better man.”

The show, which is playing in the Wilde Theatre from Tuesday, December 22, to Thursday, December 24, is a brand new adaptation by the Apollo Theatre Company, whose previous productions include Round the Horne and Hancock’s Half Hour.

Performances and queuing will be socially distanced and the venue has also introduced increased cleaning, hand sanitiser stations, and the wearing of masks inside the building.