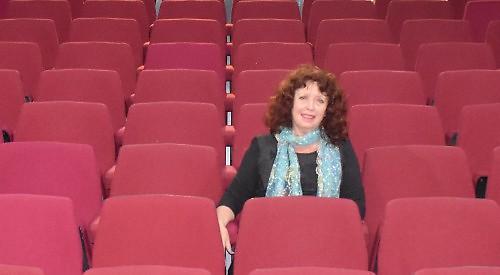 The historic Henley venue has been closed for almost seven months due to the coronavirus
pandemic.

But while other theatres, such as the Mill at Sonning, are planning to stage shows once more, the Kenton is somewhat behind as it is run on a much smaller scale and currently has no manager.

Which is where Mrs Huntington, who has been a Kenton member for 12 years and a trustee since 2019, comes in.

The amateur singer, actor and award-winning director is the new chairman of the theatre’s trustees, who have to decide whether to open the doors once more.

Their decision will be based on the result of a covid-19 safety assessment of the 240-seat theatre and whether the 2m social distancing rule would allow enough tickets sales to make shows
profitable.

“If the assessment comes back and says the number of people we are allowed in is too low, it wouldn’t be viable to re-open,” says Mrs Huntington.

“If this is the case, we will keep it closed until the social distancing rules change. Everything all depends on this assessment.”

The result is due by the end of this month.

One of the trustees’ biggest concerns is whether it will be able to stage this year’s Christmas pantomime, even in a smaller format.

The panto has traditionally been a money-spinner for the New Street theatre. Two different productions of Sleeping Beauty in the last four years have sold more than 4,400 tickets, each time setting a new record.

This income is even more important this year due to the lost revenue from the closure following a year in which the Kenton recorded a loss of £21,298, one of the biggest in its history.

However, Mrs Huntington says: “We can’t take the risk of packing in audiences. It’s a professional company and they would need to be paid and we don’t know if it would be financially viable for them.

“Other theatres are opening, such as the Bath Theatre Royal, and holding some performances with smaller casts. So maybe single performers with a distanced audience could be the way forward.

“If we can open and break even or just make a few hundred pounds I feel that is fine as it means that it will be starting to come alive again and we are beginning to do our job — making people laugh or cry and helping them have a good time.”

The Kenton, which dates back 215 years and is the fourth oldest working theatre in the country, costs up to £14,429 a month when it is open.

While closed, it is costing £5,420 a month to keep it ticking over, including the salaries of the staff who are working from home on reduced hours.

“If it does open it will be having a deep clean but for now there is a maintenance team that goes in each week. They clean it and make sure that everything is working, no cables are broken that no rats are inside.”

The stage was recently rented out to a private theatre group who used it for a rehearsal. Mrs Huntington explains: “They’ve given us a one-off payment and they paid for lighting and other bills. They are in a work bubble and it was a closed usage with no audience.”

In June, the Kenton received a £35,000 grant from the Arts Council of England, supported by the National Lottery.

It is also dipping into its reserves, which Mrs Huntington says are “good” but need to be replenished.

The chairman can’t rule out increasing the cost of hiring the theatre when it re-opens to help make up for the loss of revenue during its closure.

She says: “There is a ceiling on the amount we can charge and it’s up to the theatre groups and artists to decide on their ticket prices.

“But there has not been a decision with the rent. We have an excellent treasurer and I’ve always learnt to trust the treasurer.”

The only other people who have been in the theatre since it closed in March are the trustees who had a meeting on the stage before the rule of six came into force.

The group included four new faces who were elected at the Kenton’s annual meeting in September — Jeni Wood, a former mayor of Henley, Sarah Bell, a trustee of the Acorn Music Theatre Company, Alexis Lane, a partner at law firm the Head Partnership, and Piers Burnell, a theatre producer and radio presenter.

The trustees later chose Mrs Huntington, whose own term was not up this year, as their chairman.

She plans to remain in the role for only the next 12 months.

Mrs Huntington says: “It would have been impossible for one of the new trustees to become chair straight away.

“When the year is up one of the other trustees will take it on and there is already interest from them. I don’t think me stepping down will have an impact because in a year’s time the team will be tight knit.

“Everybody is pulling together and there is a great willingness to make this work on everyone’s behalf. It’s so gratifying to have all these people here.”

Mrs Huntington has experience as she is vice-chairman of the Henley Amateur Operatic and Dramatic Society, having also been chairman from 2008 to 2016.

She says: “It was scary at first but I soon came to live with it over the eight years I was in the role.

“We always get the blame as the chair and the important thing is that it’s not just the chairman that makes the decisions.

“I prefer being vice-chairman more — the chairman is basically a glorified agenda reader.”

Despite downplaying her new role, Mrs Huntington is setting her own agenda with the relaunch of the Kenton for Keeps appeal.

This was first launched in 2010 to help raise £350,000 for the purchase of the freehold of the theatre from the Henley Municipal Charities.

It was spearheaded by Henley developer Alan Pontin, who was then chairman of trustees.

It took two years to reach the target thanks to donations and a series of glamorous fundraisers attended by leading entertainers.

Mrs Huntington said: “It was Alan Pontin’s committee that secured the freehold.

“It was an amazing triumph and the whole of Henley got involved with it.

“ I was a member at the time and we took part in a lot of campaigning. We want the same triumph this time round. Kenton for Keeps is critical for the ongoing benefit of the theatre.”

Mrs Huntington is copying this successful format by planning fund
raising events and enlisting the help of a number of local celebrities, including Dame Mary Berry and actor Simon Williams as well as poet Pam Ayres, a regular performer at the theatre.

Almost £7,000 has been raised in the two weeks since the launch and Mrs Huntington hopes to hit the target by Christmas.

She says: “We are absolutely delighted with the way the public have embraced the
campaign.

“We know it’s difficult for people to put their hands in their pockets but the arts are so important. They are important for people’s mental health.

“A night at the theatre is what is missing and we are working our hardest to make it work so we can open and we can do our jobs.”

The other task high on her agenda is the search for a new general manager, which is being led by Mrs Lane as a new trustee with legal expertise. The previous manager, Max Lewendel, left in March after just eight months. He was the fifth manager to leave in about four years.

“We really need to hire a general manager,” says Mrs Huntington. “We’ve had some applications already and we will put out an advertisement soon.

“It’s finding someone who will embrace the theatre on all fronts. We need someone long term.”

When the theatre does re-open, Mrs Huntington wants to have a wide range of productions and performers appearing on stage and more of the type of amateur shows with which she is associated.

She says: “We need to reach out to the local community groups, the children theatres and the amateur groups.

“It’s important for people to have that experience of working in a proper theatrical production.

“We’ve had some great stars that started here — Kate Winslet played here as Pandora in The Secret Diary of Adrian Mole, Aged 13¾. Amateur groups always bring in crowds as families come along and see them — they are the backbone of the theatre.

“The bookings are consistent and the quality is astounding. The only real difference between amateur performers and professionals is that the amateurs have day jobs.

“What I really want is for the theatre to find the right path going forward. I want it to be open with the public, for the trustees to be open to the public.

“Maybe have coffee mornings so people can come in and have a look, which we used to do on Saturday mornings.

“I used to run that many years ago and I was astounded by the number of people who live in Henley and didn’t know there was a theatre here.”

To donate to the Kenton for Keeps appeal, text “Keep Kenton” and the amount you want to give to 70085 or visit www.kentontheatre.
co.uk/kentonforkeeps