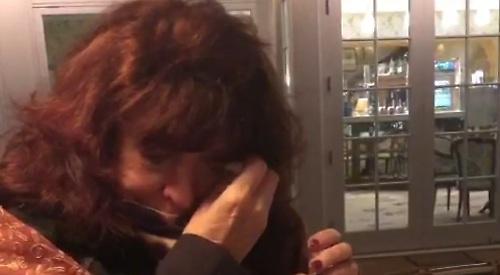 JULIE HUNTINGTON, who is chairman of trustees at the Kenton Theatre in Henley, wept tears of joy at a Christmas surprise.

Her younger son Gareth Clarke wrote an article in the festive edition of the Henley Standard to let her know that she is his “unsung hero”.

Mr Clarke, 40, who lives in Australia, recalled his childhood with his mother, an amateur actress, and older brother Gregg and how they once appeared together on stage.

Mrs Huntington said she was overwhelmed when she read the message and it was a lovely Christmas present.

She saw the article for the first time when she was at Phyllis Court Club in Henley on Christmas Eve.

Mrs Huntington said: “I get the Henley Standard every week and I was meeting my partner, Simon, at Phyllis Court Club as, like normal blokes, he had left his Christmas shopping until Christmas Eve.

“I thought I’d read the paper while waiting for him but he then turned up and he had also bought a copy of the paper. I didn’t think much of that at the time but it was unusual as he knows I always get it for us.

“We were outside and it was very cold and Simon was desperately waiting for me to turn over the pages. What I didn’t know was that he was filming me reading it.

“When I finally did turn to the Entertainments pages I looked at the right side first, which had a lovely painting of a boat, and then I looked at the left and… surprise!

“I didn’t know what to say — whatever did come out of my mouth wasn’t coherent, I was so overwhelmed. Then the water works began,

“Simon sent a video to Gareth of me reading it and he saw it in the morning his time.

“It was such a lovely Christmas present, especially when I haven’t seen him for 18 months, except for online of course but that’s not the same.”

Mr Clarke moved to New South Wales in 2012 after working there in the hospitality industry for a year.

“We keep in touch virtually every day and Gareth is great at that,” said his mother. “I always wake up to a picture or a message from him, usually a picture of food.”

Mrs Huntington, who has put the article at the front of her newspaper scrapbook, added: “Gareth said those lovely things so that’s fantastic.

“Being a mum doesn’t come with a manual, you play it by ear, so who knows how well I did. I was just trying to be me and do things right.

“The first thing you think when the baby comes is s***, what do I do now? But Gareth was the second child so I had some practice.”

One thing that stood out in Mr Clarke’s article was his memory of his first kiss in the auditorium at the Kenton.

Mrs Huntington didn’t know about this and laughed when she read about it.

“I only find out about these things afterwards,” she said. “It’s like when he lived in Tenerife and he would take a boat out at midnight and sail it around to the next coastline and have a campfire — I only found out about that 10 years later.”

Mrs Huntington also has two grandchildren, Jasmine and Harvey, from her eldest son and said: “Grandchildren are great as you can give them back and you can be the naughty grandma with them.”

Gareth thanked the Henley Standard for playng its part in the surprise. Speaking from Australia, he said: “It was a roaring success.”