Show scrapped due to covid will play to parked houses 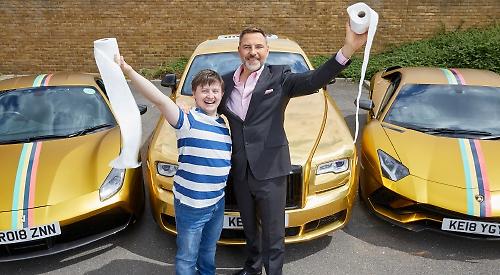 A STAGE adaptation of David Walliams’s Billionaire Boy is taking to the great outdoors in a bid to make theatre a live proposition once more.

Having started life as a national theatre tour, the show played at the Theatre Royal Windsor in February last year.

But shortly afterwards the producers were forced to pull the plug in response to the emerging coronavirus pandemic.

Now Billionaire Boy is back and bigger than ever, with a series of “drive-in” shows planned for 15 UK venues including Windsor and Newbury racecourses in April.

With cast members preparing to return to their roles, the socially distanced production will be performed in front of a “drive-in” audience of people in their own vehicles — with the sound being transmitted to each one via their car radios.

Walliams, who is known for Britain’s Got Talent and Little Britain, said: “I am delighted that families will have the opportunity to see some live theatre again. The show is hilarious and I hope it spreads some happiness in these difficult times.”

Based on his 2010 children’s book, Billionaire Boy tells the story of Joe Spud, who is 12 years old and the richest boy in the country.

He has his own sports car, £100k a week pocket money and two crocodiles as pets. What he doesn’t have is a friend, so he decides to leave his posh school and start afresh at the local comprehensive. But things don’t go as planned and life becomes a rollercoaster as Joe tries to find the one thing money can’t buy.

Walliams has often been asked what he would spend a billion pounds on. His answers have ranged from “Cake, obviously” to noting that money does not necessarily bring happiness.

He told one interviewer: “I’ve met some billionaires and they have pretty fun things like private jets and boats and houses all over the world — but I’m not going to say any of those things. If you gave a lot of it to charity, I think that would give you the best feeling, but it would be fun to have some of those toys, wouldn’t it?”

Last year he said: “There’s one thing Joe Spud has in the book which is a water slide going down from his bedroom to a swimming pool. He just gets out of bed and goes straight down a water slide.

“That is something I don’t have and it really pains me. So if I had a billion pounds to spend today I’d get that.”

According to Walliams, his favourite character in Billionaire Boy is the school dinner lady Mrs Trafe, whom he played in the 2016 BBC television adaptation.

He said: “In the story she asks Joe for money, which she says she needs for a hip operation but instead she spends it on plastic surgery.

“It was a lot of fun creating her horrible school dinners, giving her the surgery in the book and seeing what she does with the money.

“It highlights the fact that Joe’s in a pretty difficult predicament because everyone is asking him for money and they all have good reasons why they need it.

“But at the same time money is quite a corrupting thing and it makes people do bad stuff and lie to him. Mrs Trafe is really a side character but she does something pretty important in the story.

“I think children often believe — and adults do too — that if they were rich it would be the end to their problems.

“But I imagine that in a lot of cases it would create a whole new load of problems. Anyone with any money issues would come to you and it would change your relationships with everybody.

“That’s what Billionaire Boy is really about, that wishful fantasy of being rich and finding out that, actually, it’s not the solution to your problems.”