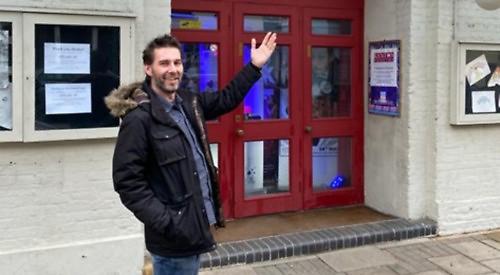 THE team running the Kenton Theatre are planning a series of outdoor events this summer as they seek to reconnect with Henley audiences.

With the latest stage of the Government’s easing of coronavirus restrictions set to take effect on Monday, confidence at the New Street venue is high and growing.

The theatre’s new manager Simon Spearing has now started in the job full-time.

The 47-year-old father of two, who joined two months ago, had initially been asked to work part-time hours.

Julie Huntington, who chairs the theatre’s trustees, said: “Because there was no light at the end of the tunnel at the time we just had our manager on for two days a week.

“Then we upped it to three days a week because there’s an awful lot to do backstage before we can open. But now we’ve got something to aim for he’s full-time and has taken up the post properly, which is amazing.

“Now we’re going full steam ahead to really make sure that the theatre is covid-safe. I think we’ve got to instill confidence in the audiences.”

With that in mind, the Kenton’s trustees have been coming up with ways to re-engage with the people of Henley.

“Something really quite exciting that we’re doing is outreach programmes,” said Mrs Huntington. “Rather than expect people to come to us and sit inside during the summer, the idea is to actually take the theatre to them.

“So we’re taking the Kenton out and we’re going to be doing Kenton outreach.”

Mrs Huntington, who is also vice-chairman of the Henley Amateur Operatic and Dramatic Society, said the first outreach event would be a riverside production of The Wind in the Willows in the gardens of Peel Fold in Mill Lane.

The venue, which has in recent years been used for summer concerts by Henley charity Opera Prelude, is the home of former Kenton chairman Alan Pontin and his wife Carol.

Mrs Huntington said: “Alan is really excited about putting this production on, so we can have three days of that. But we’re also hoping to stage a series of Saturday children’s shows in August, so that should be really quite exciting as well.”

The open-air performances of The Wind in the Willows will take place on July 28, 29 and 30, with tickets expected to go on sale shortly.

An outdoor venue for the August shows has also been identified and Mrs Huntington said confidential negotiations were under way to secure it.

She and Mr Spearing hope the Kenton could have a presence at other events taking place in the town over the summer holidays, which is usually the quietest time of the year for the 240-seat venue.

Mr Spearing said: “Normally we wouldn’t programme anything in August. Because normally there aren’t that many people around and there’s plenty of other stuff to do. This year, I think, is probably different in lots of ways.

“If I was sitting at home with my kids and, you know, my holidays hadn’t been what they normally would be, we really think that we can present something and have something to do for those people.

“I mean, we can’t fill every day of the holidays but hopefully the events that we put on will be an option for people to have a little bit of time out. Because that’s our job, really — to try to entertain people.”

While the past year has been the quietest in the Kenton’s history, Mr Spearing said that if the Government’s easing of lockdown continues to go according to plan, the autumn season leading up to the Christmas pantomime in December stands to be the busiest thanks to the backlog of shows that has built up,.

“Obviously I haven’t been in Henley for previous seasons,” he said. “But it looks like normally there would be a few things each week and then people like the Henley Players and HAODS and Reading Operatic Society would come and visit for a week.

“But this year, from September to the end of December, we don’t actually have any days when there isn’t something on at the theatre. Which is great, really, because I love to be busy.

“We’re still trying to fit shows in that we’ve had programmed over the past year. Now we’re having to find dates in 2022 for them because we just don’t have any dates in the autumn.

“We really are chock-a-block from September onwards and I think it will be like that for a little while because there is a bit of a logjam of everybody wanting to come and perform at the Kenton, which is fabulous.”

Looking ahead to December, Mr Spearing confirmed that Bear in the Air Productions, led by writer, director and producer Heather Simpkin, have started working on Cinderella, which will be this year’s Christmas panto.

Tickets for the Kenton-backed production, which was unable to be staged last December, are due to go on sale shortly.

“We just want to get the timing right,” said Mr Spearing. “I’ve been working with Bear in the Air quite closely over the last couple of months and I’m really optimistic about how that pantomime will be.

“I’ve produced a number of pantos in the past myself and, honestly, pantomime is my favourite time of the year for being in the theatre. You just get so many people through the doors and, you know, for a lot of people it’s the first time they’ve ever been to the theatre and I think it’s just lovely.”

For Mrs Huntington, who was voted in as the chairman of trustees in September, this vision of the Kenton being the beating heart of the town is one she completely shares.

“Absolutely, because I mean you’d be surprised how many people who live in Henley have no idea there’s a theatre here,” she said,

“You know, we should be proud of it. The Kenton is 216 years old this year and she’s still going strong. We should be out banging the drum and more people should be coming to see her. And if they don’t know, then they won’t come.”

She added that a mobile box office would be operating at each of the July and August outreach events in order to help boost ticket sales for the autumn season.

“We will have the means for people to buy tickets for other productions in the theatre, especially at The Wind in the Willows, with selling panto tickets and things like that.

“The Kenton’s an institution and we’ve got to shout about it. Let’s have a bit of a fanfare now that we can open again.”