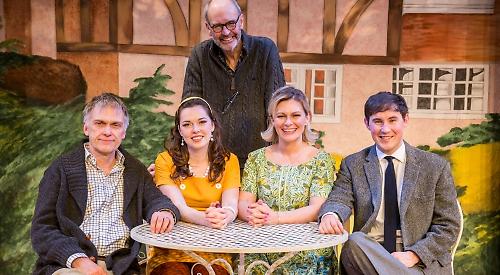 ACTOR Mark Curry will reprise the role of dodgy politician Richard Willey MP at the Mill at Sonning.

The former Blue Peter presenter will play the lead in Ray Cooney’s farce Two Into One, which is one of five in-house productions for 2021/22.

The riverside venue, which has been shut for months due to the coronavirus pandemic, will
re-open with a reduced capacity from May 17.

The season will begin with the delayed production of Alan Ayckbourn’s Relatively Speaking (May 18 to July 30) and will be followed by Two into One (August 5 to October 9).

A revival of musical Top Hat, based on the film with the same name (October 18 to January 10, 2022), supernatural thriller The House on Cold Hill (February 3 to March 25) and Busman’s Holiday (April 28 to June 25), directed by Brian Blessed, completes the roster.

Two Into One, written in 1984, depicts politicians as hypocritical sex fiends and it centres on philandering MP Richard Willey, who is struggling to conform to Prime Minister Margaret Thatcher’s strait-laced approach.

Then on the eve before voting on a bill that would outlaw pornography, cabinet minister Willey is attempting to bed the leader of the Opposition's secretary (who is also married) in a London hotel. But all does not go to plan. Mark, who played the randy politician in Cooney’s other play Out of Order at the Mill in 2014, says the play is all-out laughs from the word go.

He said: “For a start, the name Richard Willey always gets a laugh. He is an MP and a bit of a so and so.

“He is charming and suave and is after a bit on the side. While his wife is off seeing a matinée performance, he wants a bit of how’s your father with someone else’s wife. But, as with Ray Cooney, it all goes horribly wrong.

“Willey asks his assistant to book a room under someone else’s name and he gets it all wrong and it ends up with his wife coming back.

“There is a lot at stake if Richard gets found out what with the vice bill going through. When I read this one I was laughing out loud and it gets more and more ridiculous.”

Mark says the different roles play off each other well with all the characters getting a share of the laughs. He said: “Willey’s wife is also a lovely role, Ray writes very good female characters. Pigden, the assistant, and the hotel manager all get meaty lines. It really is a classic piece of British theatre.”

Mark, who has been supporting the Acting for Others charity to help struggling actors during the pandemic, is excited to be back on stage.

He said: “I can’t wait to get back there and just do what we do it has been a long time but this is what we live for.

“The one thing about the long lay-off is it makes you question what you want to do and, for me, even after 50 years in the business, the joy hasn’t gone and I am so excited to be at Sonning again.”

The play is directed by Ron Aldridge who says the Mill theatre is the perfect place for this production.

He said: “It was first done in the West End in 1984 and it was a very big production with revolves which meant it was very difficult to move it around the country on tour.

“Ray and I then resurrected it at Sonning seven or eight years ago. The stage at Sonning is quite wide so we can put the front of the hotel, the reception area and the two suites with a lounge and bedroom all on at the same time so we don’t need the same revolves.

“What you see is like a choreographed dance routine with people just missing each other. There are eight doors with people going in and out, so it is not contained at all — even the set changes are choreographed.

“The situations the characters find themselves in are just so ridiculous and you see the increasing dilemma which leads to more and more lies being told. It is a very funny play, just like all of Ray Cooney’s farces, they are laughter machines.”

Relatively Speaking is coming back to re-open the Mill next month after its initial run was cut short by the first coronavirus lockdown.

The cast, who will all be returning, are now preparing to stage the show for the third time.

Director Robin Herford said: “This is the third set of rehearsal dates that we’ve been working to, to try to re-open this show.

“We tried to do it at the end of last summer and clearly that didn’t work and then we tried to do it in March. We were going to rehearse in March and then that got cancelled, well, postponed.

“We have all the same cast, which is great. But it will be quite strange for them to come back. The first thing I said to them all, after we got closed down, was ‘Don’t wipe this, you know, keep it in your memory bank.’ I’ve told them all to keep it fresh and just read it through occasionally.”

Robin says they are going to update the performance so it will appear fresh to audiences. He said: “We’re going to use the delay as an opportunity to sort of freshen it up a bit in that there are many ways to tell the story. So, if there are restrictions put on us in terms of social distancing or whatever then we will find another way to get around it.

“We’ll try to give audiences that lovely fresh immediate feeling — I mean there’s nothing like sharing a moment of comedy in a theatre with a whole audience and hear them all laugh at the same time.

“It’s a bit like when you’re watching a football match live and you see the goal go in and there’s this sort of shared experience, which is priceless.

He added: “It does seem to be that absence makes the heart grow fonder — that people realise what they’ve been missing because, with the best will in the world, you don’t want to watch everything on a small screen.”

Other highlights of the
re-opening season are the fundraiser An Afternoon with Dame Judi Dench & Simon Williams on July 25 and Just Williams, featuring Simon’s son, Tam and Finty Williams on June 26.

The Mill will re-open with a much reduced capacity of 70 customers for dinner and show to conform with social distancing measures.

For more information and to book tickets, visit www.millatsonning.com