Cast and director can’t wait to play it again 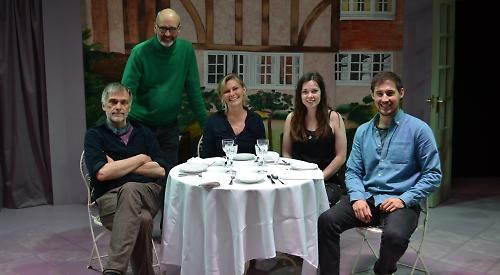 THEATRE director Robin Herford will never forget the day his profession — like so many others — was locked down.

Best known for commissioning The Woman in Black, which is now second only to The Mousetrap as the longest-running non-musical play in West End history, Robin has also been staging productions at the Mill at Sonning for almost 30 years.

“My first one was in 1992 and I think this one, Relatively Speaking, is number 14 or something like that, which is quite a few,” he laughs.

“The first one was a play called Same Time, Next Year — which was an American two-hander.”

The title Same Time, Next Year has a strangely appropriate ring to it now that Robin and the cast of Relatively Speaking are preparing to continue the production’s run at the Mill at Sonning.

The riverside venue will re-open with a comedy night on Monday. Relatively Speaking will then play from Tuesday until Friday, July 30, having had its original run cut short by the coronavirus pandemic in March last year.

“I had five productions running the day of lockdown and I lost five in two days,” says Robin. “One in New York, one in London, two national tours and, of course, the one at Sonning. I don’t think I’ve ever had five shows running at the same time before, so it had to be the time when the bomb fell on it and closed all theatres everywhere in the whole world.”

Robin may be somewhat rueful about the course events have taken but he is in no way bitter. “I think the overwhelming sense, certainly among the profession, is of relief that we can get back to doing what we love doing,” he says.

With the Government’s easing of lockdown restrictions remaining on course, Robin thinks word of mouth will be vital in helping to restore confidence in the coming weeks.

“In lockdown a lot of people have been finding joy in nature and in gardening and going for walks and things that possibly they sort of took for granted before.

“But now it will be, ‘Hey, you know, we went to the Mill, we had a fantastic meal and then we saw this show and it was just so lovely to be with other people again.’

“I mean, one’s got to be careful about these things, but I’ve got lots of friends who are keeping us awake saying, ‘When are your shows re-opening because we really want to get back in there.’ So it’s just lovely.”

Written by Alan Ayckbourn, who Robin worked with for many years at Scarborough’s Stephen Joseph Theatre, Relatively Speaking is a comedy of mistaken identities and cross-purposes aplenty.

Greg only met Ginny a month ago but he has already made up his mind that she’s the girl for him.

When she tells him that she’s going to visit her parents, he decides this is the moment to ask her father for his daughter’s hand in marriage.

Discovering a scribbled address, he follows her to Buckinghamshire where he finds Philip and Sheila enjoying a peaceful Sunday morning breakfast in the garden.

The only thing is, they’re not Ginny’s parents.

With a set design by Michael Holt, the show stars Christopher Bonwell as Greg, Lianne Harvey as Ginny, James Simmons as Philip and Rachel Fielding as Sheila.

It may have been more than a year since Relatively Speaking was performed at the Mill, but thanks to the venue’s artistic and managing director Sally Hughes, both cast and director were able to enjoy what Robin calls “a sort of half-time refresher” back in September.

“Sally was incredibly inventive,” he says. “She said we’re going to do a series of masterclasses from the Mill and she got a film crew in to film them. There was one on make-up but the first big one she did was on directing a play for the theatre.

“She said, ‘Would you do this? It’s four 90-minute sections of talking people through the process of directing a play, from the very first choosing of the play to the opening night.’ And so we used Relatively Speaking because the set’s still there and in fact the cast came back and we sort of recreated the rehearsal situation.”

During the filming of the masterclasses, Robin was interviewed on camera by former Blue Peter presenter Mark Curry, who will be returning to the Mill in August to reprise the role of dodgy politician Richard Willey MP in Ray Cooney’s farce Two Into One.

“Mark’s the most lovely guy and I’ve worked with him a couple of times,” says Robin. “I’ve known him since 1980 and he’s a wonderful interviewer, so I said to Sally ‘Why don’t we get Mark?’

“I can’t script six hours of detailed stuff but if we decide what we need to know then it can be filmed as a series of conversations between Mark and myself, which is what we did.

“We filmed production meetings, we filmed my meeting with the set designer and my way of holding an audition for an actor — and it was great. We did two or three days a week for about five weeks.

“I haven’t dared look at it yet but one of the actors who is in Relatively Speaking, Rachel Fielding, said she had watched it and said it was great, so I don’t have to be frightened.

“Obviously we would film most of the interviews in isolation, but when the cast came back to the Mill and we actually set up the rehearsal room again it was just lovely to see them all.

“They said, ‘Oh, we’ve enjoyed ourselves so much, just being in it again and revisiting the script.’

“And again, that gave us an extra sort of promise of, yes, we will do this again. And we can’t wait to get back to it.”

Tickets for Relatively Speaking include a two-course meal in the restaurant before the show.

For more information and to book, visit www.millatsonning.com