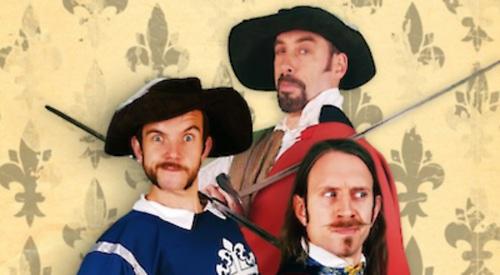 THE Kenton Theatre is to stage a summer roadshow production of The Three Musketeers at Henley Rugby Club.

Starring children’s entertainers Morgan & West, there will be two performances of the show on Saturday, July 24 at 2pm and 4pm.

It is thought the audience for the outdoor event will be seated in the grandstand at Dry Leas.

A spokesman for the show’s producers said: “Sharpen your swords, lace up your boots and stick a great big feather in your hat. Morgan & West present a fun for all the family retelling of Alexandre Dumas’s classic tale. A whirlwind of whimsy, wit and (s)wordplay await.

“Can the dashing musketeers retrieve the Queen’s prize diamonds? Will the nefarious Cardinal Richlieu get away with his dastardly scheme? Why on earth would a double act attempt to do a show about literature’s most famous trio? Find out in Morgan & West present The Three Musketeers.”

A few days later, as part of its summer outreach programme, the Kenton is to present a riverside production of The Wind in the Willows at Peel Fold in Mill Lane, playing from July 28 to 30.

Full details are still to be confirmed, but tickets are due to go on sale shortly.

Meanwhile, the theatre has confirmed that it will be re-opening its box office for in-person ticket purchases at 11am on Monday.

Tickets for The Three Musketeers are on sale now.