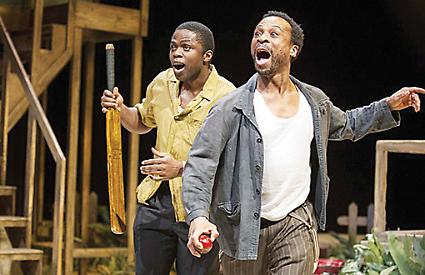 THIS play, Moon On A Rainbow Shawl, has everything going for it. It has National Theatre pedigree, the cast is from the top drawer and the play is cleverly wrought, balancing cramped relationships and emotions.

So what is the problem? The problem is that I couldn’t hear most of it because of the strong Trinidadian accents. I wasn’t the only one at the Oxford Playhouse straining to understand the language. And while we all no doubt eventually worked out what was being said the immediacy of its effect was lost and the play slowed.

When that happens you tend become detached and to see a play, or any work of art, as if by numbers rather than being absorbed in it.

What a shame because the ingredients are so obviously good. The annoying thing is that 20 to 30 years ago we would probably have had no trouble with the speech. But those voices have died out in Britain now as the children of first generation immigrants speak with the accents of their birthplace — England, Scotland and Wales.

The work was written in 1957 before Trinidad and Tobago were fully independent from the British Empire so links with the UK were direct and strong.