Veteran drummer’s properly kitted out ahead of Mill gig 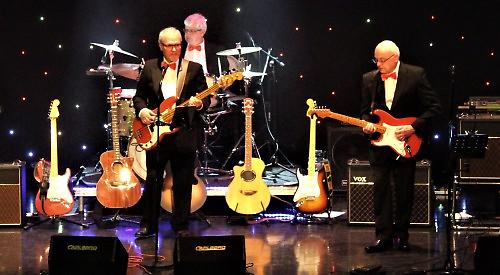 BY his own admission, Chris Wright may only be the third best drummer in Lower Shiplake.

But that’s no disgrace when the village is also home to Ian Paice of Deep Purple and Barriemore Barlow of Jethro Tull.

Chris, who lives in The Chestnuts, is a member of Shadows tribute band the Bourne Again Shadows.

He says his Lower Shiplake ranking has been a family joke for many years — not least with his son Ian, who is also a drummer.

Last June, when Chris turned 70, his children presented him with a framed cymbal with a brass plaque congratulating him on keeping hold of his third place spot for more than 30 years.

Earlier in the year, however, Chris had already given himself an advance birthday present in the form of a drum kit once owned by Shadows’ drummer Brian Bennett.

Chris has been a fan of the band for almost as long as he can remember.

At the age of 13 he even bought his mum a Shadows record for her birthday so that he would have a chance to listen to it.

“Even I thought that was a bit cheeky,” he laughs.

Chris will be putting his Brian Bennett kit to good use on Sunday, July 4, when the Bourne Again Shadows play the Mill at Sonning. The all-instrumental show will be the five-piece band’s first live performance anywhere in more than a year.

On this occasion they won’t be joined by Cliff Richard singer Simon Goodall, but a Cliff and the Shadows show at the Mill is planned for November 7.

“Every show we do, even with Simon, the mix is about two thirds vocal numbers and one third instrumentals,” says Chris.

“I mean, the instrumental ones get just as good a reaction as the Cliff ones, so we’ll do all the Shadows’ big chart hits from the Sixties and then some of the more popular ones from albums and extended plays.

“Some of those are classic numbers. For example, we do one number which features Pete, our bass player, which is a bass solo called Nivram — which is ‘Marvin’ of Hank Marvin backwards. The Shadows have a quirky sense of humour, you know?

“Then there’s another one which features a drum solo called Little ‘B’ for Brian Bennett.

“So for our first show at the Mill we’ll be doing that number as well. That’ll be me playing a Brian Bennett drum solo on Brian Bennett’s former drum kit.”

The show will also be the drum kit’s first public outing with Chris holding the sticks.

“I got it a couple of weeks before lockdown started last year, so I’ve never been able to use it in the show before — it has just been in my drum room at home.”

But that’s not to say the kit hasn’t had plenty of use over the past year.

With the band unable to tour or even rehearse together in their usual way, they have embraced the possibilities offered by Zoom-style modern technology.

“Pete, our bass player, is pretty skilled with that,” says Chris. “So what we’ve been doing is selecting a number each month and playing it and filming it at home and Pete does the mixing.

“If you go on our Facebook page you can see various numbers where we’ve all recorded our bits individually at home and through the wonders of technology it has all been brought together.”

Tickets for the July 4 show cost £42.50, including dinner. To book, visit www.millatsonning.com