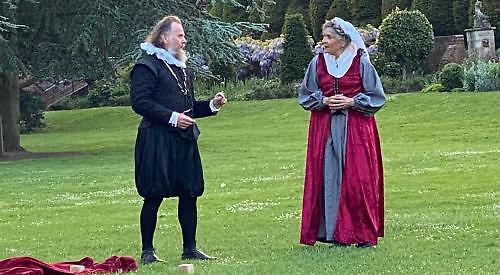 A BALMY evening in early summer by the banks of the River Thames.

Swans, geese, dappled sunlight — and a bunch of actors who have put together a production of Romeo and Juliet in a mere 60 hours.

This production, orchestrated by director Gavin Leigh, was performed before a live audience in the glorious grounds of Caversham Court — and also live-streamed — in support of the children’s charity Daisy’s Dream.

When Romeo, a Montague (Alec Watson) meets Juliet, a Capulet (Annie Hammond), it’s love at first sight — but we are reminded that “they stumble that run fast” as this energetic performance plays out.

Hammond’s impressive Juliet is well able to hold the audience. She convincingly questions the cruel coincidence leading her to fall in love with someone she is supposed to hate.

The courtship between Hammond and Watson is playful and authentic, but warning notes are clearly sounded by Friar Lawrence (Olga Blagodatskikh) and Nurse (Maggi Veltre) as they mentor, advise, cajole and sometimes tease the two young protagonists.

Colin Hurley’s Capulet is masterful — and utterly believable — in his rage at his errant daughter when she defies him over her marriage plans. Any parent of a teenager would recognise his sheer exasperation, mixed in with affection as well as anger.

A pared-down cast and narrative allow us to focus on the main feature of the play — the behaviour of young people, often sincere but not always productive.

Watson and Hammond show us believable teenage confusion about relationships. Rash actions arising from both love and hatred lead to dire consequences.

Banter between Benvolio (Tobias Cordes) and Mercutio (Kat Dulfer) leads to a rowdy confrontation and some vigorous stage fighting. Tybalt (Zoe Land) is killed by Romeo, so the rift between the warring families deepens.

The speedy, secret marriage of Romeo and Juliet compromises Juliet and ultimately leads to the death of them both.

The poignant final scene — two young people lying dead and cold — made me reflect on current concerns over teenage mental health and wellbeing.

Thank you 60 Hour Shakespeare for a most memorable evening. Very well done to all those involved.