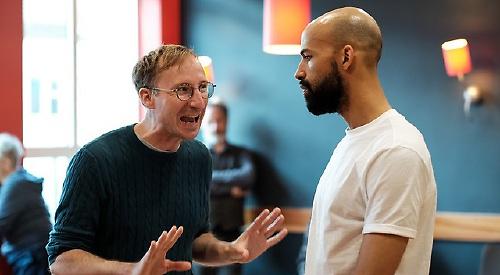 HE may have met a grisly end on the orders of Henry VIII and his chancellor Thomas Cromwell but Hugh Faringdon, the last abbot of Reading, is still remembered fondly in the town, writes Matthew Wilson.

In November 1539, after being tried and convicted of high treason, he was hanged, drawn and quartered in front of the Abbey Church.

Now Faringdon’s story is being dramatised by Reading’s Rabble Theatre, who are staging an outdoor production in the Chapter House of Reading Abbey ruins.

Written by Beth Flintoff, The Last Abbot of Reading was originally due to have been staged last June but had to be cancelled due to covid.

Rehearsals for The Last Abbot of Reading are now under way.

The show is previewing from next Friday (June 11) to Tuesday, June 15, followed by evening and matinée performances from Wednesday, June 16 to Saturday, July 3.

The staging of the production coincides with the 900th anniversary of the founding of Reading Abbey by Henry I.

Sir John Madejski, a patron of Rabble Theatre, said: “I’m so pleased to see that Rabble have survived the storm and are now ready to get back to doing what they do so incredibly well.”

For more information and to book tickets, visit www.rabbletheatre.com