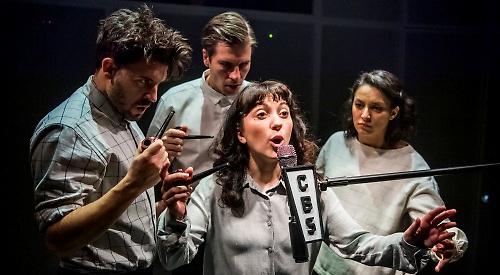 The War of the Worlds | Oxford Playhouse | Tuesday, June 8

HG Wells’s The War of the Worlds, the tale of a Martian invasion of Earth, was a late Victorian classic of science fiction. Like all good stories, it’s capable of updating and reinvention.

Every recreation seems to reflect its era. In 1938, in the shadow of a looming world war, Orson Welles produced a breaking news-style version for radio that panicked US listeners into believing the country was actually being overrun by tentacled aliens.

In the Seventies there was a stadium rock version, while Steven Spielberg’s 2005 film vision gave more than a nod to the terror attacks of 9/11.

And now the Rhum and Clay Theatre Company are touring a production which gives a highly contemporary spin to an old subject. Devised by the company and written with Isley Lynn, this War of Worlds links the Orson Welles broadcast with modern anxiety over media manipulation, fake news and online trolling.

The first part recreates the 1938 broadcast and shows the fear it induced in some listeners. Apparently, people switched on late because they’d been listening to a popular ventriloquism show and so believed they were hearing a record of actual, terrifying events.

In the present day, Meena, an aspiring British podcaster, spots an intriguing story after befriending an old American expat who, as a 13-year-old girl, was left behind by her family fleeing in terror of the Martians.

Meena visits the New Jersey town of Grover’s Mill, a place full of tourist tributes to an invasion that never happened, and inveigles herself into the confidence of her dead friend’s family descendants, under false pretences.

She wins the trust of the geeky son who spends his time peddling fake stories online because that’s where the money is and because the truth doesn’t matter. Inevitably, Trump and Brexit surface.

Meena has her podcast story, one of family betrayal, and a larger betrayal of the truth. But the play shows that the absolute truth isn’t that simple to establish. And it also asks whether, however much we might laugh at American credulity, we would really be immune to the kind of hoax that Welles perpetrated. Or more modern examples of fakery.

All the parts are played by an energetic, versatile cast of four, including Julian Spooner who also directs, with Hamish Macdougall.

Sound and light evoke anything from a Thirties radio studio to the sweep of Martian death rays. Altogether this War of the Worlds is an adventurous, engaging and sometimes comic addition to the many versions of the classic story.

And, if you’re considering a return to the theatre, then do visit the Oxford Playhouse. The staff make sure you feel welcome and secure, and what’s on stage will entertain and make you think.