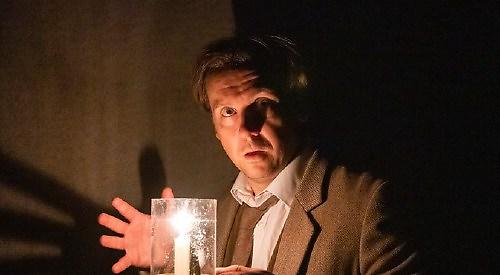 THE Woman in Black has enjoyed a remarkable stage history.

Adapted by Stephen Mallatratt from the novella by Susan Hill, it started life in 1987 as a filler over the Christmas season at the Stephen Joseph Theatre in Scarborough.

This efficient and economical two-hander (or three-hander if you count the ghost of the Woman in Black) was intended to play in a bar space to some 70 people.

Thirty-four years later it was still running in the West End until being interrupted by Covid.

The play sticks closely to Susan Hill’s original, although it adds the framework of a play within a play. Some 30 years after the event, and in order to purge himself of the nightmare once and for all, solicitor Arthur Kipps recruits a younger actor to recreate a terrifying ordeal which still haunts his life.

The confident, unnamed “Actor” (Antony Eden) steps into the young lawyer’s shoes while “Old Kipps” (Robert Goodale) takes on half a dozen other parts from senior partner to coachman.

Young Kipps is despatched to a chilly, fog-shrouded corner of North East England to attend the funeral of Mrs Drablow, a client of his firm. The old woman lived a reclusive life in Eel Marsh House, only reachable across a causeway when the tide is low.

But why is everyone in the nearby town so reluctant to speak about the dead woman? And why will no one acknowledge the presence of the wasted, black-clad figure that Arthur keeps glimpsing?

The eerie figure associated with the late Mrs Drablow and her grim house will affect Arthur too, and, it seems, even the very production which we are watching.

Sound and lighting contribute immeasurably to this production of The Woman in Black, directed by Robin Herford.

The word-pictures painted by the Actor and Old Kipps conjure up endless shorelines and open skies, alluring and sinister at the same time.

There were abrupt plunges into darkness, shrieks from the audience to echo the sound effects and a distinct sense of unease, on stage and out front, especially in the second half. Just the thing to bring people back to the theatre.

Excluding musicals, The Woman in Black has the distinction of having a longer West End run than any play apart from The Mousetrap.

And in fact it’s the better play, as a visit to the Oxford Playhouse will demonstrate.