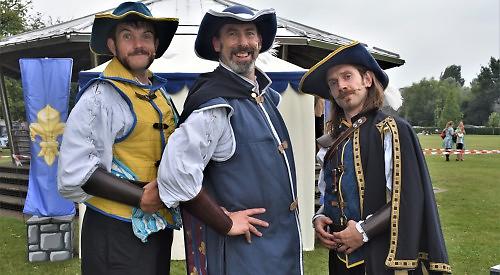 THE Kenton Theatre celebrated the lifting of coronavirus restrictions with the first of several “summer roadshow” performances at outdoor venues.

A three-strong cast from theatre company Morgan & West performed a version of The Three Musketeers, in which they played a total of 15 characters, in front of the bandstand on Mill Meadows on Saturday.

They frequently disappeared into a tent to change costumes and the show, which about 70 people watched, included sword fights and musical numbers.

Theatre manager Simon Spearing said: “I'm really pleased that we've been able to welcome audiences back and it was amazing to have such brilliant and wildly different performers.

“The theatre is a magical building but has been sitting empty for too long and really needs people to come in and enjoy themselves. It was a privilege to see that happen. It was also amazing to present such a funny, inventive show outside and we entertained lots of people who might not otherwise have considered going to the Kenton.”

The next roadshows will be Morgan & West’s performance of The Wind In The Willows at Peel Fold in Mill Lane, which began on Thursday but will continue until tomorrow (Saturday), LAS Theatre’s production of The Lion Inside at Mill Meadows on August 8 and Gilbert and Sullivan’s HMS Pinafore at Henley Rugby Club on August 28.

Meanwhile, the Kenton, which is in New Street staged two parties on Friday last week to welcome back visitors and supporters.

Dozens of people attended the sessions, one of which was aimed at children and the other at adults.

There was also a collection for the Kenton For Keeps campaign to help it survive the financial impact of the extended closure.

DJ Gary Boys, of Thames Side in Henley, set up his deck on stage in the main auditorium and played a mix of Motown, funk and soul classics.

He played along to the beat on a tambourine while his friend Cyril Felix played congas.

Members of the audience were invited to come up and dance along and there was also a light show.

For more information or to book tickets for forthcoming shows, call (01491) 525050 or visit www.kentontheatre.co.uk