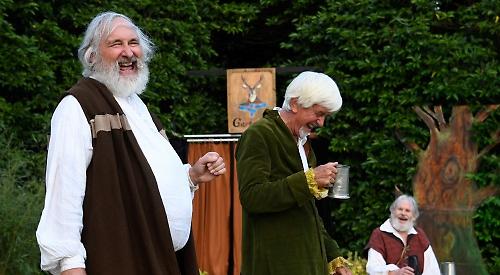 SINCE when was it considered okay to aim to seduce a married woman, as Falstaff sets out to do in The Merry Wives of Windsor?

Indeed, not one, but two. But the (almost) cuckolded husband seemed more intent on protecting his own honour than that of his wife — ’twas ever thus, as Shakespeare would say.

In this adaptation by the Garden Players, Falstaff (Graham Weeks) could have done with being a little fatter — another pillow or two perchance? But he certainly made the most of every bawdy joke and double entendre that he could.

His body language left little to the imagination while ensuring that nothing too explicit would bring a blush to any maiden’s cheek — nor to that of any older member of the audience. Sir Hugh Evans (Gerard Nolan) gave an excellent performance as the Welsh parson — is he Welsh or had he studied the accent well? He had a voice that would be welcome in any Welsh male voice choir.

Doctor Caius ( Paul Freeman) made a superb French physician. He was French to his very fingertips and funny as well.

Mistress Quickly (Ginnie Freeman) drew in the audience, always quick to play her part, as her character demanded. Although hers may be seen as a supporting role, what a star she was.

This production played the farce for all that it was meant to be, not least in the pastiches as performed by Mistress Alice Ford (Emily Plumridge), and Mistress Anne Page (Gráinne Harling) as they plotted their various revenges against poor old Falstaff for his hopeless wooing of them both.

It is invidious to mention any of the cast in particular as they were all cast so well and performed their roles equally so but it would be wrong not to mention the outstanding performances by Harling and by her husband Tim as the almost cuckolded husband of Mistress Alice Ford.

His almost insane emptying of an offending laundry basket deserved a scene to itself. It is performances such as theirs which set any and every Garden Players’ production way beyond amateur dramatics.

Congratulations must also go to Steve McAdam for his performance as the stern “he is to be obeyed” George Page and to Debbie Keenan, the raunchy hostess of the Garter Inn.

One may imagine the less inhibited audiences of Shakespeare’s time roaring with laughter at the jokes and innuendoes in The Merry Wives of Windsor. Maybe it is this chilly English summer that kept decorum in place? The cast deserved better.

Their performances and grasp of the play were impeccable — due largely, no doubt, to the expert direction of John Timewell. The only tiny criticism might be in the timing — when will am-drams speed up their entrances and exits?