Panto team will ensure Cinders goes to the ball 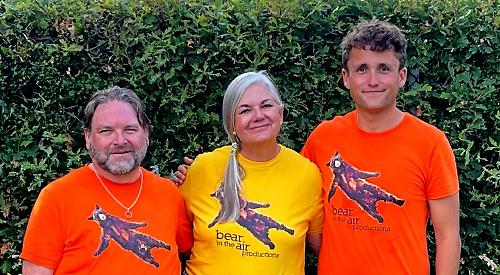 A YEAR on from when the Kenton Theatre’s Christmas pantomime had to be called off due to the pandemic, Cinderella is definitely going to the ball.

With the six-strong cast having just been announced, it is full steam ahead at Bear in the Air Productions, the company that is staging the show in partnership with the New Street theatre.

Most of December will be given over to the panto, with a total of 33 performances lined up.

She said: “Cinderella was all ready to go for 2020 and we’d actually started advertising it before Sleeping Beauty finished. Ticket sales have got off to a good start, so it’s looking really good.”

Recalling how events played out last year, she said: “We called it off when it was really clear that there wasn’t any possibility of coming back to the theatre, so we called it off before we auditioned last year.

“We normally audition at the beginning of September and we were out of the first lockdown but it was looking like there was going to be another, so we were cautious.

“We said, ‘How long can we wait before we audition?’ and we agreed to wait until early October.

“Then in October, we and the trustees got together and said ‘Well, they’re not going to open the theatres up even with social distancing,’ so we called it off.

“But this year, hurrah, theatres are going to be allowed to actually do what we’re meant to do, so Cinderella will get to go to the ball.”

Played by Anna Amelia, Cinderella may be the name going up in lights, but the ugly sisters played by Christopher Chandler and Josh Norris will be doing their best to steal the show.

In keeping with the finest traditions of panto, audiences are this year guaranteed two dames for the price of one.

“Dames are always really popular,” said Heather. “And of course Sleeping Beauty didn’t have a dame in it. I remember one person coming up to me in the foyer, going ‘There’s no dame in the show!’

“You don’t always get one — not every panto has got a dame. But this year I promise you’ll have two. The ugly sisters are the dames, so this year you’ve got double.”

The Kenton panto is now such a firmly established tradition each December that it is easy to forget that it only dates back to 2012 when Heather, who was then one of the theatre’s trustees, first suggested it.

In the years since, under different directors and producers, its reputation has continued to grow, both in Henley and the wider theatre world.

“I think it has got an excellent reputation,” said Heather. “For its quality, for its really high standard of performers. It’s very popular.”

With extensive competition from other productions, it is important that the Kenton panto stands out on its own terms.

Heather said: “We try to make it a really valuable story, so it’s not just the show with big musical numbers that you often get from the really big pantomimes. The unique thing about this Cinderella is that it’s a wonderful story with fun, real characters in there. We keep the jokes clean and we make sure that it’s family-friendly. There’s lots for the little ones as well.

“My slant on it is always to make it uniquely Henleycentric and keep that tradition of high-quality fun pantomime going.”

While fun, frivolity and laughter are at the heart of the panto tradition, Heather thinks the stories themselves carry a lot of weight.

She said: “They’re based on myths and legends and they’re very important allegories for life. The old mystery plays, that’s where they come from, and therefore the integrity of the story — good versus evil and the quest for love — these are really important things. Therefore I always make sure I’m true to that story.

“When I did Peter Pan a few years back, I took a lot of dialogue directly from JM Barrie. I used the book and the same goes for all the pantos I write.

“I take a look at the Grimms’ fairy tales and I look at all the old versions of it and I’m really true to the story because I think that’s important. It’s not just about the spectacle, it’s about the story and I think children respond to that.”

Bear in the Air Productions is itself a family affair, with Heather being joined by her husband Charlie Stobert and actor son Samuel Ranger, who will be serving as the producer of Cinderella.

Cinderella is playing at the Kenton from December 11 to 30. Ticket prices vary by performance. For more information and to book, call (01491) 525050 or visit www.kentontheatre.co.uk