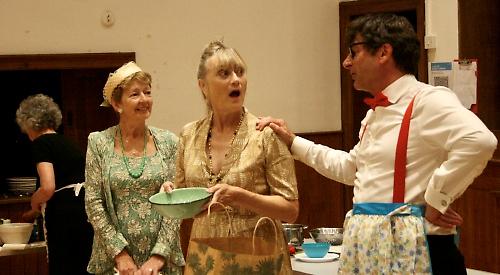 IT will be fourth time lucky when the Henley Players stage their latest production at the Kenton Theatre later this month.

The group, which was founded in 1948, normally produces two full-length plays a year — one in the spring and another in the autumn.

But early last year the final round of rehearsals for Saturday, Sunday, Monday by Italian playwright Eduardo De Filippo was derailed by the emerging coronavirus pandemic and subsequent lockdown.

The show, which was due to be performed at the start of April, was postponed until October and again until March this year before the Government’s easing of covid restrictions this summer allowed the gradual re-opening of theatres.

Directed by Teri Zambigli, the play is now being staged from Wednesday to Saturday, October 20 to 23. Evening performances are at 7.30pm and there is a Saturday matinée at 2.30pm.

Henley Players’ Gráinne Harling said: “The committed cast have stayed together through all the breaks, disappointment and Zoom calls and are finally looking forward to presenting this classic Neapolitan comedy to an audience.

“Written in 1958 and set in the kitchen of Donna Rosa Priore and her husband Peppino, the story follows the extended family over three days as we are introduced to this occasionally hot-tempered but always warm-hearted cast of characters who reveal their marital misunderstandings, tiffs and confrontations while paying particular attention to the unforgettable traditional Sunday meal.”

The play was first performed in the UK in 1973 with married actors Joan Plowright and Laurence Olivier in the mother and father roles at the National Theatre.

Following the success of that production, the couple reprised their roles five years later for an episode of Granada Television’s Laurence Olivier Presents.

The play was subsequently adapted into a 1990 Italian feature film starring Sophia Loren as Donna Rosa. At the Kenton, Donna Rosa will be played by Julia Ashton, a veteran performer with the Maidenhead Drama Guild, who auditioned for Saturday, Sunday, Monday shortly after moving to Henley in late 2019.

She said: “I think we got cast just before Christmas 2019 because I’d just come to Henley and I thought, ‘Oh, let me get involved in something’ because I’ve always liked am-dram.

“We started rehearsing in the January and we were all very keen to get going. We had a great cast and it was all going very well — and then we were stopped in our tracks once it was announced that we wouldn’t be able to perform.

“It was all a bit disappointing but obviously couldn’t be helped.”

Julia, who lives in Gravel Hill, says that in the absence of normal in-person rehearsals during lockdown, the cast and creative team decided to meet up on Zoom once a month to read the play through.

“It was lovely because when you’re reading a play and you can’t see each other you actually focus on it more,” she said.

“From a personal point of view I was focusing on the words and so it was great to really understand what the play was all about.

“We kept up the energy and it was fantastic. Now we’ve got this slot in October, we’ve got about two weeks to go and I don’t think anything is going to stand in the way.”

Julia says that as the matriarch of the family, her character Donna Rosa is the one who “keeps it all together”, adding: “I cook the Sunday ragu faithfully — hence the title of the play.

“I prepare it on the Saturday night, stirring it for three hours, and then the Sunday is the big ceremony. Everybody arrives and it’s great. They sit down and we’re waiting with anticipation for this lovely, wonderful ragu that Mother has cooked.

“I bring in the ragu and we have the lunch — and then the Monday for this particular play is the aftermath of everything that happens.”

As Julia affirms, a lot happens once the ragu is served.

“There’s an argument between the young lovers and then there’s Mother and Father — something’s going on between them.

“There’s a little bit of tension and it all explodes over the dining room table. The irony is that the ragu doesn’t get eaten.

“The aunt refers to that in act three — I spend all Saturday night cooking but we don’t eat it. But that’s what life’s about, isn’t it? Life gets in the way.”

For director Teri Zambigli, who lives in Goring, having previously lived in Henley for six years, the play is a snapshot of a particular place and time that strongly echoes her own childhood in Italy.

She said: “It’s interesting to see inside a family, you know? What it was like to be inside the family in the Fifties in Italy.

“A bit later on, divorce will become a reality in Italy but in 1959 it was not possible to divorce, so it was very interesting to see how they managed hunger and sorrows as a couple.”

Teri adds that the role of Donna Rosa is a dream part but a highly challenging one.

“It’s one of the most difficult roles for an actress to do because it switches from comedy to tragedy constantly,” she said.

“This play is pure poetry in a way because it goes from intimacy to psychological drama and creativity.

“But I have to say that Julia is delivering an incredible performance. Apart from the fact that she is a talented actress, she understands the personality of this woman, Donna Rosa, so well and she is amazing.”

As well as directing the play for its Kenton Theatre run, Teri is in the process of making a documentary about Eduardo De Filippo’s legacy in the English-speaking theatre world.

Titled Pane e Eduardo, which translates as “Bread and Eduardo”, the film also had to be put on hold as a result of the pandemic, with Teri and cameraman Will Webb unable to continue conducting interviews in person.

She said: “It was very difficult to go forward with the interviews but thank God we kept alive the project for the Kenton Theatre with the Henley Players, which is a part of my documentary.

“The idea is to see an amateur company for the first time in contact with Eduardo’s work — and for me it’s amazing to see how they did react to it, how they embraced everything.

“The Henley Players are, I will never be tired of saying this, truly an amazing group. Very supportive.”