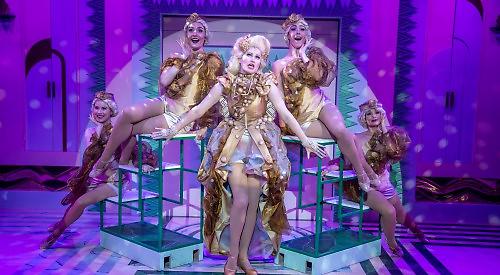 WITH the country still feeling the effects of coronavirus, the long-awaited production of Top Hat has come at the right time.

The musical, which is based on the 1935 film of the same name, was spawned from the hardship experienced by millions following the Wall Street Crash of 1929.

Everyday Americans needed distraction and from this emerged a sort of Hollywood golden age of glitz and glamour and the likes of Fred Astaire and Ginger Rogers took centre stage.

With lyrics and music by Irving Berlin, Top Hat brings the magic of that famous dance partnership to the stage at the Mill at Sonning for this year’s Christmas production.

It tells the story of Broadway sensation Jerry Travers, who dances his way across Europe in a bid to win the heart of society girl Dale Tremont.

Berlin’s songs underpin every scene and the programme includes Puttin’ On the Ritz, Cheek to Cheek, Isn’t This a Lovely Day and, of course, Top Hat and White Tie and Tails.

For choreographer Ashley Nottingham there is a parallel between the hard times of the Thirties to what we are experiencing now with the covid pandemic.

He said: “Top Hat was created to lift people’s spirits and joy and hope. It is a musical comedy that is all about relationships and
mistaken identity.

“It is a completely innocent show, it doesn’t venture into evil in any way as there are no ‘bad’ characters.

“It is a farce that’s light-hearted, fun and very nostalgic. The show will connect with those of us who have grandparents or have had grandparents who were around at that time.

“You will see in the fashion and the make-do attitude that is on display, there is a lot of elegance to it and while the original film was in black and white, here there is a lot of colour so there is so much to see and really enjoy in it.

“With Top Hat it was what the world needed at the time, let alone in America. It is strange that after these last 18 months of a pandemic we have a parallel and it could have been written for now.”

Ashley says the production, which had been postponed from last year due to the pandemic, pays homage to the film but the modern advances in technique and style breathe new life into the story.

He said: “I have choreographed it in such a way that it pays homage to the original film and what was going on in Hollywood at that time.

“The way that Jonathan O’Boyle has directed it, is the characters are on the front foot so that modern energy has been brought to it.

“There is tap dance, which is not necessarily seen a lot these days, which is so well executed by the company.

“If you go back to when the film was made, the moves were played out differently. We have got the kind of leads now who weren’t around in the Twenties and Thirties and both of our actors have worked in musical theatre for a while so will bring their own energy to it. They are not carbon copies but we are paying homage to it in a modern way.

“It is absolutely beautiful, the costumes, lighting and set design before you see anyone set foot on the stage is really beautiful. If one was to buy a ticket and sit in the auditorium it is like a gateway to sitting on a soundstage in Hollywood when the movie was made.

“Unlike at bigger venues, you can see the taps happening inches from your nose and so you are totally immersed in the production and feel part of it.”

Evening shows are playing from Tuesday to Saturday, with Saturday matinées every week and Sunday matinées from October 24. There will also be Sunday evening performances on December 12, 19 and 26. The final performance is on January 8. All tickets include a two-course meal in the restaurant before the show. For more information and to book, visit www.millatsonning.com