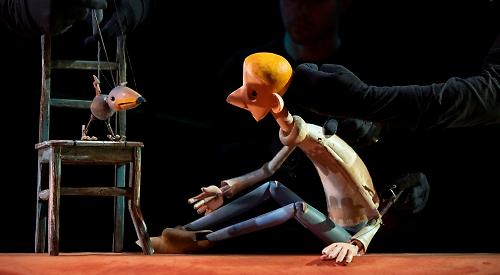 EDWARD is a bit of an oddball. A shy and troubled boy, he is always watching the horizon, waiting for something to happen, writes Phil Simms.

Then one day the “Jumblies” arrive and his life is turned upside down as he discovers that it is okay to be a little bit different.

The Dong With the Luminous Nose is based on Edward Lear’s nonsense poem of the same name and explores the age between being a child and becoming an adult.

The production, which features a huge and colourful cast of abstract and figurative puppets, is being staged at the Kenton Theatre in Henley at 2pm next Sunday (October 31).

Puppeteer Nix Wood said: “Edward is a bit of an oddball and he stares out across the sea one day and the Jumblies turn up. It is up for grabs what they are but they teach the little boy what it means to be lonely and also raise questions about what it means to be different.

“There are very few words, it is a bit like a silent film but has a beautiful soundtrack. It is quite a sensitive show with lots of space for interpretation.

“It is not at all didactic, it gently introduces the themes of being isolated and the Jumblies do teach Edward he can be accepted even though he is different and he does make friends.”

The other puppeteers, who will also be dressed in black, are Andrea Sadler, Gilbert Taylor, Richard Booth and Ronnie Le Drew, who is best known as Zippy from ITV’s Rainbow.

The production also includes some live singing and sections of the poem being spoken.

Nix, who has been a puppeteer for 10 years, said: “The interesting thing with puppetry is that we all move around the different characters.

“One of these sees his body change into a big planet as he tries to copy other people around him. That is always a favourite of children — there’s lots of visual humour.

“Some of the puppets are in human forms in a tabletop style and there are others that are beautifully abstract where children will have a lot of fun guessing what they are. Families do end up talking about what they are seeing, which is really nice. They find their own meaning in the show.

“It is designed for those aged seven-plus, although sometimes we have younger children. I think children take what they want from it — it is a bit of a gift.”