Theatre was Carry On star’s own great escape 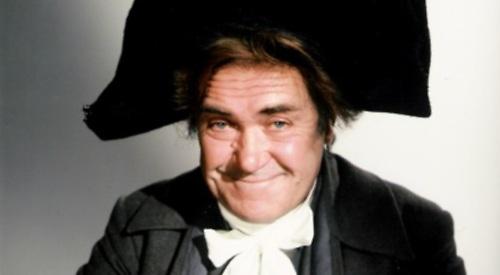 ANYONE familiar with the Carry On films would recognise the bumbling comic actor Peter Butterworth and assume he was one of life’s clowns.

But his small stature and ready smile hid a daring wartime story of a naval pilot shot down and taken as a prisoner of war.

Now his son, Tyler, has gathered it all together for a show at the Kenton Theatre next weekend called A Bit of a Carry On.

It’s a tale of danger, escape, recapture and being sent to the very prison at the heart of the celebrated 1963 war film The Great Escape.

Peter Butterworth’s life story was defined by his time in the German POW camp — including the way he met his wife, the impressionist and actress Janet Brown.

Tyler’s show of anecdotes, film and TV clips, soundbites and photos is a loving tribute to both his parents.

A lot of it centres around their showbusiness careers as actors. But none of it might have happened if not for Tyler’s father’s history as a Fleet Air Arm torpedo bomber pilot who was shot down over occupied territory in June 1940.

“I discovered this story and a side to Dad that I didn’t know,” says Tyler, “There are a couple of elements in it where I have to stop and take a glass of water because what he went through was so overwhelming.”

Janet and Peter met in 1946 after the war. She had been a troops entertainer and the first woman to go over to France after D-Day, so she already had a background in the forces and entertainment.

Peter was first sent to the Dulag Luft POW camp from where he made a failed escape, and then Stalag Luft III, where The Great Escape was set.

He was there for five years and it was this that led to his subsequent acting career and meeting Janet.

“My father met an RAF flight lieutenant called Talbot Rothwell,” says Tyler. “They had a mutual interest in performance and somehow managed to convince the camp commandant to let them build a 300-seat theatre within the prison precinct.

“That in itself is remarkable and Rothwell — Tolly as he was known there and later in the film world — wrote sketches and entertainments. I think, in a way, it was their form of figurative escape.”

The two officers had to agree not to try to escape, which they did, so they weren’t part of the mass breakout dramatised in the film.

Most of the escapees were caught and Hitler ordered 50 of them to be executed but away from Stalag Luft III itself.

“They endured so much and at the very end were force-marched to another POW camp as the Allies were closing in,” adds Tyler.

Once back in Britain, Tolly and Peter made a show from the sketches they’d created called Back Home. It toured to Scotland where Tolly took Peter on a blind date and that’s where he met Janet.

Janet had set herself on the performance road from an early age and by the time war came she was part of a troupe of entertainers equivalent to the Entertainments National Service Association.

After she met Peter, she continued as an actress and impressionist until her big break on The Mike Yarwood Show, where she came up with the definitive impression of Margaret Thatcher.

Her career soared as a result and she even received a letter from the new Prime Minister herself upon reaching Number 10, which Tyler produces in the show.

Talbot Rothwell went on to write most of the Carry On films and so strong was the bond with Peter that even if he wasn’t available for a whole film one scene would still be written in for him.

The bawdy humour of those films follows a direct line from the pair’s Stalag Luft III shows, says Tyler.

He adds that A Bit of a Carry On will be entertaining — how could it not be? — but also an eye-opener for the audience because his father’s past was exactly that for him.

Tyler, who is married to the actress Janet Dibley, became an actor himself and featured in many TV series, including The Darling Buds of May.

Now he concentrates on audio production, documentary-making and taking A Bit of a Carry On around the country.

The show is playing at the Kenton Theatre at 7.30pm on Sunday, November 14. For more information and to book, call the box office on (01491) 525050 or visit www.kentontheatre.co.uk