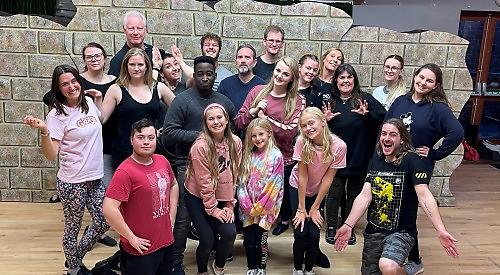 A GRUMPY green ogre who just wants to be left alone is the unlikely hero of the Henley Amateur Operatic and Dramatic Society’s autumn production.

Based on the Oscar-winning 2001 animated film, Shrek The Musical is playing at the Kenton Theatre from Wednesday to Saturday, November 24 to 27.

Featuring all-new songs by Thoroughly Modern Millie composer Jeanine Tesori and accompanying book and lyrics by Pulitzer Prize-winning playwright David Lindsay-Abaire, the show first opened on Broadway in 2008 and went on to win a Tony Award.

Such is Shrek’s box office appeal, having so far spawned three film sequels and a Puss in Boots spin-off, that HAODS chairwoman Sam Riley says tickets for the show are already doing brisk business.

She said: “The Saturday matinée has actually sold out. Well, I think there’s like five tickets left but they’re not together, they’re all randomly dotted around. I think a lot of kids want to go and see it.”

Evening performances of the show start at 7.45pm and are also selling well.

Sam added: “Saturday night is probably two-thirds full already, Friday is probably about half and Wednesday and Thursday could always do a bit more.

“For us to have sold this many tickets is fantastic because it’s a very expensive show to put on.”

Owing to the coronavirus pandemic, the show is being staged a year later than originally planned.

But as Sam recalls, HAODS had a relatively lucky pandemic, having decided against doing a spring show in April 2020.

She said: “We didn’t actually plan anything, which was quite fortunate, because we normally do shows in April and November.

“We ummed and ahhed about it and then decided that we wouldn’t do one. We must have had some kind of foresight or something. There was no particular reason, it was just that we as a committee said, right, okay, we won’t do a spring show, we’ll do the autumn one, which will be Shrek.

“So we had a director and we had a musical director but we hadn’t even thought about casting it at that stage.”

A year and a half later, Sam confirms that the same creative team is still in place.

Director and choreographer Jake Turnell Willett is best known to Henley audiences for playing the title role in HAODS’s production of Jesus Christ Superstar in November 2019.

Meanwhile, musical director Jane Southern is a veteran of numerous productions over the years.

Having choreographed and
co-directed past HAODS shows, this time around Sam is more involved on the production side, together with the group’s vice-chairwoman Julie Huntington.

“I’m in the cast and I’m playing the Wicked Witch and about nine million other characters,” she laughs.

For the benefit of anyone unfamiliar with Shrek, the story based on William Steig’s original 1990 picture book features an extensive supporting cast of fairytale characters.

Sam said: “You’ve got the Gingerbread Man, Peter Pan, the Fairy Godmother, the Wicked Witch, the Three Little Pigs, the Three Bears, the Ugly Duckling — all the ones you would recognise. The fairytale creatures are only in about three different scenes in the whole show, so when you’re not being a fairytale creature you’re doing lots of other things. It’s a whole ensemble and everybody’s got multiple parts to play.”

The 22-strong cast has been on board since August this year and thrice-weekly rehearsals have been taking place in the HAODS Studio next door to the Kenton.

Sam said: “The rehearsals are going brilliantly. We had our first complete run of the show last Sunday and it went unbelievably well. I was like, ‘Wow, it’s going to be great.’

“Everyone is so excited to do it — it’s such a fun show, it’s ridiculous. The characters are completely over the top but it’s very funny. It’s just a really nice light-hearted story.

“Shrek the Musical pretty much tells the story of the first film. The fairytale creatures get evicted from the Kingdom of Duloc, where they’re living, which is owned by Lord Farquaad.

“He kicks them out and they end up on Shrek’s swamp and Shrek’s like, ‘I’m not having you on my swamp — it’s mine!’

“So they say, ‘Well, you need to go and stand up to Farquaad because we’ve got nowhere else to live.’

“Shrek decides he’s going to go and front up this Lord Farquaad and say ‘Get these fairytale creatures off my swamp!’ And then en route he meets a talking donkey. He and Donkey then decide to go and rescue this princess from a dragon. She has been there for years and years.

“They find out that Farquaad wants to marry a princess, so they decide that if they take Princess Fiona then they can get the fairytale creatures out of the swamp and Shrek can have his swamp back.”

While Shrek The Musical has previously played in the West End and at larger regional venues such as the New Theatre Oxford, it was only licensed to smaller theatre companies for the first time last year.

Sam said: “Music Theatre International, which owns the rights to Shrek The Musical, actually approached us and said would we like to do it?

“They must have picked societies around the country because up until 2020 Shrek the Musical wasn’t available to amateur groups.

“They approached us in 2019 and said that amateur companies were going to be able to perform Shrek in 2020 and would we like to be one of those groups. And we all went, ‘Absolutely!’”

One of the first amateur groups in the country to stage the show was Panda Productions, 20 miles down the road in Chesham.

Sam said: “Julie and I saw it the week before the first lockdown. I’ve not heard of anybody else doing the show before us.”

Sam and Julie were so impressed by the set used in the Chesham production that they agreed to buy it once Panda Productions had finished with it.

Sam said: “They had basically made this set, which is all on wheels, and they said ‘Do you want to buy it?’ We bought it from them and the plan is to sell it on to somebody else doing Shrek. We’ve already approached other groups to sell it on after we finish because we’ve got nowhere to store it.

“It’s a brilliant design because it turns around. So one side is Shrek’s swamp and the other side is Lord Farquaad’s castle.”

• Tickets for HAODS’s production of Shrek The Musical cost £21 for adults, £16 for under-16s and £64 for family tickets. For more information and to book, visit www.kentontheatre.co.uk