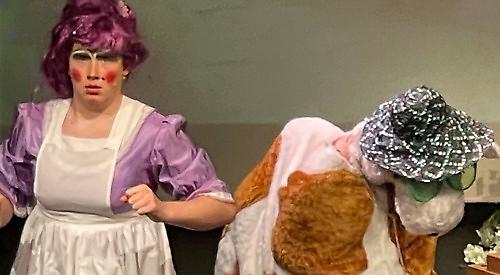 THE StageWorks performing arts school staged its winter pantomime at the Kenton Theatre in Henley.

The production of Jack and the Beanstalk featured students from Henley, Benson and Caversham.

The story followed Giant Blunderbore, who threatens to eat any villager who fails to pay their rent, so Dame Trott (Billy Bowerman) has to ask Jack (Charlotte Gregory) to trade in her precious cow Buttercup (Isabelle and Ruby Sawyer).

Director Lloyd White said: “It is hard to believe that this show was cast almost a year-and-a-half ago.”

He paid tribute to Emma-Jane Taylor, the principal of StageWorks, saying: “It is a credit to all the students, teachers and, in particular Emma-Jane, that StageWorks is still here and able, after all this time, to put on a full theatrical production showcasing our talented students.

“A pantomime is a chance for all of us to leave our worries at the door and indulge in a little down time, watching Jack fight the giant, save the kingdom and marry his princess.”

Ms Taylor said: “We all work very hard to showcase the talents and performances of the children. To put on such a big production requires a team effort. We can’t thank enough the students, chaperones, parents, supporters, front of house and friends of StageWorks because without them none of this would be possible.”

The production was in aid of Riverside Counselling in Henley.