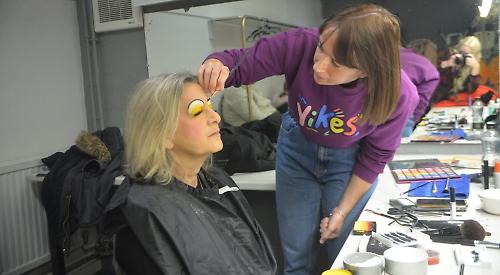 CAN you spot the “ugly sister”? There’s a clue in the metal chain around her neck.

Henley Mayor Sarah Miller was given a “glamour” makeover at the Kenton Theatre to help promote its Christmas panto, Cinderella.

She had her face painted to look like one of the Ugly Sisters, Beatrice, who is being played by Josh Norris.

Marnie Spiers, who will be helping with cosmetics during the panto’s run at the New Street theatre, applied the make-up with some help from Josh.

The Mayor, who chose her ceremonial robes as her “costume”, said: “Christmas time and the panto at the Kenton is a big thing in Henley, so it means a lot to me being here.

“I actually used to come here years ago to perform and many of my friends performed here and their kids perform here and it’s a lovely place that plays a big part in the community.”

Josh, 25, said: “To have the support of the Mayor has been absolutely
wonderful.”

He and Christopher Chandler, who plays his sister Eugenie, will appear in 33 performances of the panto between December 11 and 30.

The musical theatre actor said: “I am super excited about the panto as this will be my stage debut because I only graduated last year and I’m excited as the team is so incredible.”

Samuel Ranger, who co-founded Bear in the Air Productions with the show’s writer and director Heather Simpkin, said: “We had the idea to do Sarah’s make-up and emailed her and she replied straight away even though she was on holiday.

“The last year for performing artists has been so tough so to have the Mayor be so supportive is terrific. We can’t thank her enough.”

Meanwhile, the Mayor will be performing at the Henley Christmas Festival this evening (Friday). She will join Matt Richardson and his band Lucky To Be Alive on stage for a rendition of Henley-on-Christmas, a song written by the Mayor a year ago but which has not yet been performed publicly.

“I will be up there hitting my thigh and playing the tambourine,” said Sarah.

She has also organised a drag karaoke night at the town hall bext Friday (December 3) from 7.30pm.

Drag queen Just May, a Geri Halliwell impersonator, will be the star guest.

The proceeds will go to the Henley and Peppard branch of the Royal British Legion and the Henley Regatta for the Disabled.

Tickets cost from £20 and are available online at bit.ly/3nT0qJp