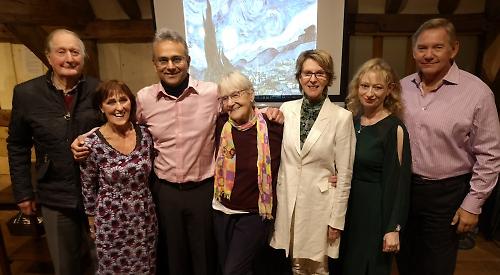 HOW often do we look at a painting and think “I like that” or “I don’t like that” and never consider the reason why?

It’s a question that poets from Walter de la Mare to Earle Birney have asked themselves and responded with a poem.

One work of art reflecting on another — or ekphrasis, to give it its technical term.

And what a pleasure to see that combination presented by Henley-based theatre production company Jeux d’Esprit at the King’s Arms Barn in aid of the Chiltern Centre.

Directed by Jill Richardson and presented by Brian Cheadle, five actors brought 10 paintings alive with the words of 10 poets.

Thanks to Vicki Feaver’s reference to a faint “whisker” of underarm hair in her poem Oi Yoi Yoi, we noted her amused appreciation of the naked lady painting of the same title by Roger Hilton.

Thom Gunn’s response to Caravaggio’s Conversion of St Paul made us understand that there is no final interpretation.

For Gunn, the old ladies praying in the church of Santa Maria del Popolo where he viewed the painting were as meaningful as the work itself.

Brian Cheadle’s informative commentary as he introduced each painting and poem inspired us to look and listen carefully.

Passionate about Breughel’s The Hunters in the Snow, he chose three accompanying poems which reflected not only differing aspects of the painting but also the time in which they were written.

A still but busy picture that raised not only verbal descriptions but a further question from poet Anne Stevenson, “What happens next? In the unpainted picture?”

This reminded us that the narrative doesn’t end with the painting, it can continue with our response to it.

Through their sympathetic readings, the actors brought another layer of interpretation to the paintings. Alok Tripathi seemed to share both his own and the poet Michael’s Longley’s wonder at LS Lowry’s stick-like Man Lying on a Wall bearing “the enormous weight” of all that sky.

The performance ended with a fun reading of UA Fanthorpe’s Not My Best Side in response to Paolo Uccello’s St George and the Dragon followed by Don McLean’s Vincent, a haunting musical tribute to Vincent Van Gogh’s The Starry Night.

Enchanted, we left knowing that the next time we view a painting, we will consider far more carefully why we like or even dislike it.

Following Sunday night’s performance, Jeux d’Esprit achieved its target of raising £10,000 in aid of the Chiltern Centre over the seven years it has been performing at the King’s Arms Barn.