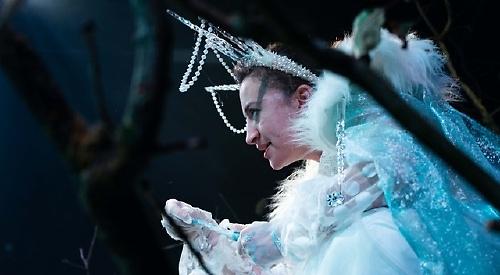 The action takes place in Denmark, Sweden and Lapland, so it’s no surprise that the set design by Casey Jay Andrews has a Scandi-chic feel.

The production makes use of an apron stage, adorned with wintery twigs, and a cottage with a roof garden, making creative use of different levels.

In a drama deriving from a children’s story, storytelling is at the heart of the production. Vibrant grandmother Ragna (Ajjaz Awad) promises the audience a tale that will fascinate and intrigue them.

The central characters Gerda (Maryam Grace) and Kai (Tom Myles) are great pals and bond over friendship rituals, banter and quizzes. They love long words and are also great at maths.

But their friendship is shattered when shards pierce Kai in the eye and heart and his personality changes entirely.

When he disappears on a sledging trip, Gerda determines to find him and, despite her massive fears about life, she embarks on a quest that changes her.

The audience is entertained by the set of quirky characters she befriends along the way.

The anchor of the cast is Maryam Grace as Gerda. Grace manages a balance between vulnerability and wise-cracking strength.

Myles is animated in his portrayal of confused but amiable Kai and a couple of talking animals — Crow and Bae the Reindeer — characters who draw chuckles from the audience.

Awad energetically engages the audience as Ragna but is also splendidly imperious as the Snow Queen herself, resplendent in white drapes.

The production puts forward some thoughtful messages about growing up, managing emotions and dealing with loneliness, so it is pitched at teens and tweenies.

Gerda overcomes anxiety and Kai learns how to articulate his feelings.

Low self-esteem is tackled by the Snow Queen presenting as a damaged individual who has decided that to be cold and feel nothing is a safer strategy than being fully human.

But seriousness evaporates in the colourful and upbeat finale with a Christmassy vibe.