Kenton Cinderella ‘has got a bit of grit to her’ 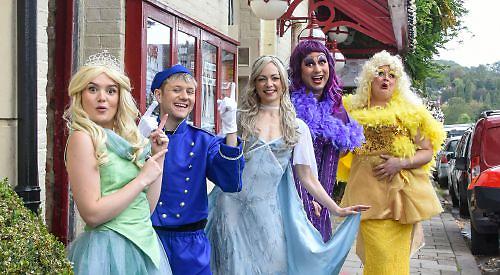 CINDERELLA is “very clever” and “has got a bit of grit to her”, the actress playing the title role in this year’s Kenton Theatre pantomime has said.

Together with the rest of the six-strong cast, Anna Amelia has spent the past three weeks in rehearsals for the show, which opens at 2.30pm tomorrow (Saturday).

The actress, who grew up in Durham, gained her first panto experience at a young age at the city’s Gala Theatre.

She says: “I was in the dance group, which I loved, because dance is one of my favourite ways to express myself in theatre.

“But I’m really loving the opportunity to actually play one of the parts — even though Cinderella has less audience interaction than some of the other roles.

“With this cast we’re now so close as a group that you feel that no matter what happens you’re just going to bounce off each other — and you can sense if somebody needs more from you.

“When I was younger you don’t get a chance to be as involved in the scenes. I feel really lucky to have the bonds this cast have made with each other because I think it wouldn’t come across as well on stage if we didn’t get on so well as people offstage.”

Daniel Craig-Salmon, who is playing Buttons, adds: “I think actors in general are such ‘people people’ and empathetic, so we end up gelling with people ridiculously quickly.

“Then you learn how people work and you learn how to bring out the best in each other as a company — and I think that’s what we’ve done extremely well here. With this one, for me, it’s just been electric.”

Having spent the first two weeks in a London rehearsal studio, the cast moved in to the HAODS Studio next door to the Kenton Theatre on Monday.

Writer-director Heather Simpkin is delighted with how things have come together ahead of tomorrow’s opening performance.

She says: “These guys are the most talented group of people I’ve ever worked with on a pantomime and we’re a good way ahead, so we’re doing detail work now and adding layers. It’s wonderful.

“When you’re directing a pantomime, what you’re trying to do is empower your cast to take responsibility for the action within it that might change from night to night. They’re going to be doing a lot of ad-libbing and working with the audience and reacting to what they get.”

According to Heather, Cinderella will have a running time of around two hours, including an interval, depending on how the show’s audience interaction plays out.

She says: “We’ll get children up on stage and have a little chat with them — so that can run on for a bit longer. But the show will be under two hours.”

Daniel, who grew up in Nottinghamshire, remembers what it was like to be one of those starry-eyed young audience members.

He says: “Panto was the first thing I ever saw in a theatre. It was a school trip, I was in Year 3 and we went to watch Aladdin at the Palace Theatre and I loved it so much.

“What I loved most of all was Widow Twankey, the man in the dress. It just captivated me — it was the cupcakes in the costume that made me crease up. Gosh, how old was I? Seven? It was just the most hilarious, sparkly, exciting thing I’d ever seen — and I sort of always knew that I’d be in a panto one day because the energy is unlike any other.”

For her part, Anna always wanted to have a chance to play Cinderella.

She says: “I was in Cinderella when I was quite young and, because I think she gets the best costumes of all the princesses, I did always want to be Cinderella for that reason. It is one of those stories that everybody knows really well and I’d like to think the audience will be on Cinderella’s side, so that’s exciting.”

Anna has recently moved to London, having graduated from the Royal Conservatoire of Scotland in Glasgow in June.

In conversation, her native North East accent is still to the fore, but she has decided to give Cinderella a voice all of her own.

She says: “It’s nice to put on a different accent because then I don’t feel like I’m playing myself as Cinderella — I am Cinderella, a different person, which I think is important.

“Everyone knows Cinderella but it’s nice to try and add a bit of a different angle to her. Like, I think she has got a bit of grit to her. She’s not outspoken but I think there’s a lot under the surface.

“When you first look at her you just think she’s a bit sad and quiet and she’s not got much going on — but I think she’s very clever and it’s been nice to explore different ways that I want to portray her.”

• Cinderella is playing at the Kenton Theatre until December 30, with up to three shows on some days. Ticket prices vary by performance. For more information and to book, call (01491) 525050 or visit www.kentontheatre.co.uk