Kenton panto is the happy ending we all needed 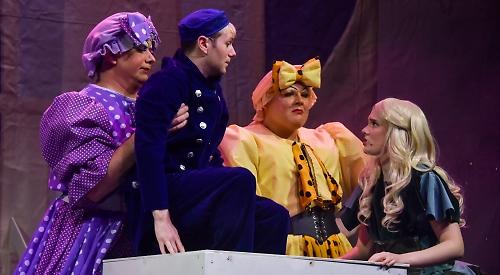 IF you are looking for a cheerful, colourful show to brighten a winter’s day, get tickets for Heather Simpkin’s Cinderella at the Kenton Theatre.

There’s audience participation from the
get-go, heaps of jokes and puns and top class singing and dancing.

Everyone knows the rags to riches story of poor Cinderella, played charmingly by Anna Amelia.

Jessica Condon is pure nastiness in a slinky black dress as the stepmother but also, on the other hand, elegant and gracious as the fairy godmother.

Daniel Craig-Salmon is chirpy and cheeky as Buttons, who compères events and keeps the audience engaged as things move along.

Eve Kitchingman is thigh-slappingly marvellous as Prince Charming, especially in her delivery of Queen’s Somebody to Love.

Josh Norris and Christopher Chandler are eye-catching and hilarious as the ugly sisters, who are spiteful to Cinderella but also in rivalry with each other.

Norris and Chandler are great at knockabout comedy, while Grace Allen’s spirited dancing and sweet-throwing helps everything go with a swing on stage.

This Cinderella is a traditional panto version of the fairy story, with magical transformations for the ball.

The shoe-fitting scenes are comical, but gritty Cinderella comes through her tribulations and there is, of course, a happy ending in the wedding scene — just what we need right now, I would say.

There are plenty of opportunities for a bit of “Oh no it isn’t! ... Oh yes it is!” while the ghost-hunting scene allows for “It’s behind you!” from an enthusiastic audience.

The children loved it — and so did I.