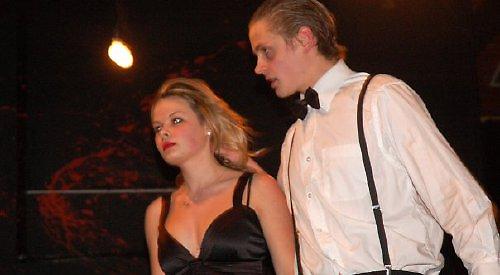 WHEN he was growing up in Caversham in the late Nineties, Ed Pinker dreamed of becoming an actor.

Now he is living in Canada and realising his dream with a number of stage, TV and film credits to his name, including a part in a new Netflix drama series.

The 30-year-old, who was born in London, recently had his first
in-person audition since the coronavirus pandemic began and is optimistic about his future.

“For years I thought there was a set path to become an actor but it’s all about finding your own path,” he said.

Mr Pinker was a small boy when he moved to Caversham with his family as his parents wanted a better quality of life.

His father Ian was a procurement manager for British Airways and Virgin and his mother Linda was a nurse. Both are now retired and still live there. He has two sisters, Emma, 35, and Rosanna, 33.

Mr Pinker first acted when he was a pupil at Caversham Primary School and appeared in a production of Oliver! by amateur drama company Masquerade.

He said: “I have no idea why but I wanted to be an actor before I even knew what it really was.

“We went to the Hexagon in Reading see Masquerade, who were performing Jesus Christ Superstar and at the back of the programme it said they were auditioning young boys for Oliver!

“Sadly, I was on holiday on the audition day but when I got back I apparently begged my dad to ask the company if I could still join and they said ‘yes’. That gave me a taste for being on stage.

“I remember that on the first night I was the most nervous I’d ever been but then when I got on stage I couldn’t stop smiling. I was supposed to be a starving orphan, so not much acting was going on there.”

In his teens, Mr Pinker attended Shiplake College where he was inspired by his drama teacher
Catherine Saker.

He said: “She was so pivotal in me becoming an actor. She had such an amazing theatre brain. She took us to shows that were edgy and challenging and not just to see The Lion King.

“We did Arabian Nights and she spent the entire budget on sand and we did the whole performance on it. Our final A-level piece was a modernised version of The Threepenny Opera, set in a Krays-era gangland snooker bar.

“The set was a full-sized snooker table in the middle of the stage, with the audience sat all around us.

“When I was 17 she told us about the National Youth Theatre’s programme where you go away for a summer and learn how to act and then you become a member of that theatre.

“I auditioned, got in and went away for the summer. I got my AS results and I can remember my mum saying, ‘You need to work harder’ but I was like, ‘I don’t care, mum, I’m going to be an actor’.”

Mr Pinker then attended East 15 Acting School in Loughton, Essex, where he made his professional debut in a production of The Beggar’s Opera performed in Regent’s Park in London.

He said: “I learnt a lot of discipline at East 15 because if you missed three classes then they dropped you down a year. It’s intense and you really immerse yourself in acting and singing.

“The Beggar’s Opera was my professional debut, which was insane, and everything I wanted was coming ito fruition.”

After three years, he signed with an agent and landed his first big role in a play called Top Story, which was performed at the Old Vic Tunnels, an underground arts venue beneath Waterloo station in London.

Mr Pinker said: “In my previous play I had maybe four lines and then I landed this role with about 80 pages of lines to learn.

“That was amazing because I learnt how to take ownership of such a big role. I think every actor has a bit of imposter syndrome where you think, ‘Am I really doing this, is someone really trusting me with their money?’

“During the rehearsal process you question if you’re the right person for the role but by the opening night it’s okay.”

The actor then had a few smaller roles in plays at Shakespeare’s Globe in London but found that auditions were drying up.

He decided to “learn the craft” of television acting by appearing in some short films and then landed a stage role in The Roundabout at the Park Theatre in London. The show moved to New York for about two months and Mr Pinker decided to apply for third generation Canadian citizenship as his grandmother had been born there in the hope he could move across the Atlantic.

Mr Pinker recalled: “New York was amazing. I’d never been there before and it was magical living there for six to eight weeks. That was the turning point for me as I decided that I was going to move to North America at some point.”

He returned to England and the West End to appear in The Mousetrap, which is the world’s longest-running play.

Mr Pinkler said: “This was nine shows a week for seven months. It was a very long time so I was learning how to do a show multiple times and you’re standing on stage thinking, ‘Is this the first or second time I’ve done this today?’”

He also auditioned for some television shows and nearly landed a part in the first season of the sci-fi show Misfits.

Mr Pinker recalled: “I shouted my lines like I was performing on stage and the casting director was like, ‘Thanks but no thanks’.

“I just couldn’t see the next step of my journey and it was at that point I decided to go to Canada to meet some agents.”

He moved to Toronto in January last year after appearing in a short sci-fi film called The Harbour starring English actor James Dreyfus.

“Covid hit three months after I moved and the world just slowed down,” said Mr Pinker.

“Somehow Canada kept the film industry bubbling along. I filmed a commercial in my condo — they sent me the product and we filmed it through Zoom.

“All the auditions went from in- person to online, which was okay but it was difficult not being in the room with someone to connect with them.”

Then in September he landed a part as a Sergeant Howe in season two of Locke & Key, a Netflix drama series about three siblings moving into a house filled with reality-bending keys.

“It’s a small part in a huge machine,” he said. “I did so many stunts, horse riding, which I’m terrible at, and I got to hold a musket. My first shot was on the horse. I had training so I was like, ‘I’m fine, it’ll be fine’ but it was in the freezing cold snow at 4am with four cameras, one on a crane and about 150 people watching.

“They shouted, ‘Action’ and the horse just didn’t move. I was like, ‘Come on, move!’

“When I watched it back they had very cleverly edited it.

“We mostly filmed in a warehouse designed like a cave. I had a big fight scene which was so cool to learn but it was a long old day as we filmed it twice.

“It was about a day-and-a-half of fighting for about 10 seconds of footage.

“I fly through a vortex, which was a cool stunt where they rigged me up to a harness and I had a rope at the front to counteract me.

“They shouted, ‘Action’ and I flew backwards. The first time I was petrified but the second time was amazing.”

Mr Pinker, who acted in flashback scenes in the show, said he enjoyed working with Kevin Durand, who is one of his favourite actors from Lost, which he watched when growing up.

He added: “I’m very used to seeing myself and being critical and I was expecting it to be really weird when I watched it but I thought it was wicked, I was just so proud to see all the work that we had done.”

Since then, he has appeared as a homeless man in a Canadian film called Super Dicks and has also done a number of voiceovers.

Mr Pinker said: “I have my first audition in person again since the start of the pandemic.

“It has never been a question of should I give up, it’s always, ‘Here’s an obstacle, how do I get around it?

“If you’d told me 15 years ago that I’d be a working actor who had just worked on a Netflix show, I would have said, ‘What’s Netflix?’

“Yes, my dream was, and still is, to be an actor but I am all too aware of the impermanence of work.

“I have big aspirations and this is definitely just the beginning of where I want my career to go. However, I’m trying to stay in the present so I can enjoy what comes my way, both the highs and lows.

“I’ve got the most supportive parents I could ever ask for. Since day one they have done everything in their power to support me.

“It’s sad that I live in a different country to them, especially during the pandemic, but I think they are really proud of me and that’s better than having Netflix on your CV.”