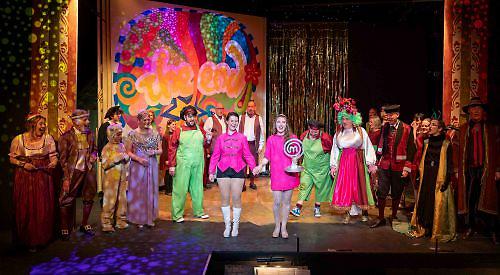 IF you are in need of a midwinter boost, grab a ticket for Gloria Wright’s fabulous production of Sleeping Beauty.

The show transports you to the kingdom of Motorovia, with colourful set designs by Greg Ryder, lighting by Oliver Hemming and costumes by Jan Castle and Jean Simmons.

A comical script by local writers Pete Orton and Barbara Wood is brought to life by an energetic, committed cast and creative team.

In this production, the well-known tale of the Sleeping Beauty is framed within a time-travelling story.

The time machine (creative sound effects by Rob Alderton) sweeps Prince Stanley (Laura Gow) to Motorovia, where we meet the amiable king and queen (David Simmons and Rebecca Cleverley) and their household, including Chef (Will Lidbetter), who is making preparations for the Princess’s 18th birthday party.

The Prince chances upon Princess Aurora (Evelyn Hansell) and falls head-over-heels in love.

The story is familiar: Carabosse’s fatal curse at Aurora’s christening has been softened by Lilac, who decrees that she will sleep for 100 years if she pricks her finger, which she does at her 18th birthday.

The pause of a century while the household sleeps allows for a hilarious woodland scene at Trunkfest, where we meet a crazy bunch of Sixties revellers. All is well, finally, when Stanley wakes Aurora with a kiss.

The script is crammed with jokes and puns, corny and otherwise. As you might expect from panto, there are plenty of laughs in the company of outrageous dame Nanny Nina (Pete Smithson), superbly laconic Lord Loverduck (Graham Watt) and the clowning duo Pillock (Fiona Huntingford-Ledger) and Pollock (Tom Mackriell).

These two prove masters of knockabout comedy and keep the audience, young and old, giggling.

Amanda Woodbridge’s choreography treats us to plenty of fancy footwork from the cast.

There are brilliant renditions of a string of great musical numbers and a live band under the musical direction of Sue Huntingford-Ledger and Gaby Clements.

Well done to all the members of the youth theatre, who really pull their weight on stage.

A good-humoured and high-spirited cast work together to make a glorious, fun-filled evening that really fizzes. I couldn’t stop smiling.