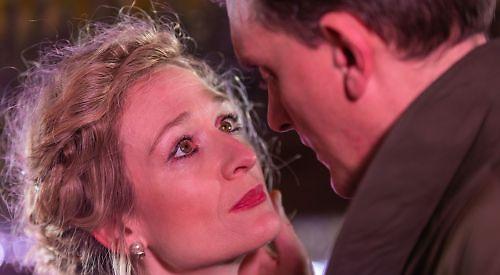 PERHAPS there is no station buffet in the world as glamorous — and melancholy — as the one at Milford Junction in Yorkshire.

It is here that Laura and Alec first meet in April 1938.

Both are middle class and happily married, sort of. Alec is a GP, which comes in handy when Laura needs a speck of grit removed from her eye.

One meeting leads to another and then several more as the couple find themselves falling, helplessly and hopelessly, in love. It is, or could be, a junction in their lives.

The story is familiar to generations of cinema-goers as Brief Encounter, the 1945 film directed by David Lean and scripted by Noël Coward. It was based on Coward’s one-act play Still Life, now revived at the Mill at Sonning.

Ingeniously, the theatre’s riverside bar has been transformed into the station buffet.

The audience sits in small groups at separate tables, served with lunch or dinner, or afternoon tea.

The windows which usually look out on to the slowly rotating waterwheel now proclaim the name of the station. Beyond are the roar and flickering lights of passing trains.

We are a few feet from the action. This is proper, immersive theatre, fluidly directed by Tam Williams.

There are strong performances by the lead couple of Alasdair Craig and Rachel Pickup with support from Elizabeth Elvin, Antony Jardine and Emily Panes, all versatile and convincing in doubled parts. You might object that the attraction between Myrtle, the buffet manager, and Albert, the station porter with a ukulele, is treated by Coward as a lower-class comic foil to the “serious” romance between Alec and Laura. But then Coward knew his audience and which side his bread was buttered on.

In the end, the series of brief encounters between the leads dramatise a conflict between desire and duty. “We are nice people, you and I,” cries Laura and it’s true, they are.

If you miss this worthwhile revival first time round, the Mill is bringing it back for further short seasons in March and August.