Poignant, wry depiction of comedy genius’s battles, inside and out 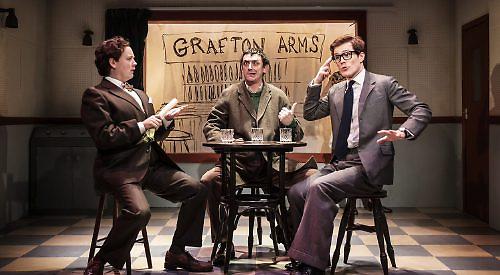 IT is said that we owe the humour of the likes of Paul Merton, Eddie Izzard and Stephen Fry to the influence of the Goon Show, which revolutionised BBC radio comedy in the Sixties.

Its creator, Spike Milligan, also made numerous contributions to the satirical magazine Private Eye, which probably helped prompt its current editor, Ian Hislop, together with co-writer Nick Newman, to pen their latest play SPIKE. The play is listed as an “absurdly funny comedy” but it is far more complex than that.

Of course funny lines are plentiful but it is far more about Milligan’s troubled psyche, the effect the war had on him and in particular his difficult relationship with the BBC.

The quick-fire action, directed by Paul Hart, leaps in short bursts from the recording studio to the pub, to the battlefield and Milligan’s home, cleverly reflecting Milligan’s zany personality and made extremely effective by an adaptable set and superb lighting by Rory Beaton.

The sound design by Tom Marshall was masterly and provided vital support to the production throughout.

John Dalgleish gives an inspired and energetic performance as the troubled genius that was Milligan, conveying the ready wit with wry sardonicism and reminding us with accomplished trumpet-playing that Milligan was also a skilled jazz musician.

He was very ably supported in the role by George Kemp as Peter Sellers and Jeremy Lloyd as Harry Secombe, who both deftly avoided the temptation to gloss over the familiar characters with mimicry, showing us the true personalities of the colleagues with whom Milligan had to work so closely.

If Milligan had already invoked our sympathy, it was further extended to his loyal but increasingly desperate wife, delicately portrayed by Ellie Morris.

Hislop and Newman wove a sort of comic running gag through the play in the form of Janet, the sound operator, played by Margaret Cabourn-Smith, who was tasked with demonstrating to the audience the wide variety of sound effects that formed such an important part of the Goon shows. It was a sort of aural slapstick that you could only assume was there to lighten the mood and certainly proved popular with a large section of the audience.

The Goons were iconoclastic at the BBC and the lack of understanding of Milligan’s humour and empathy for his situation was forcefully portrayed by Robert Mountford as the BBC executive, who just didn’t “get it”.

But the audience figures couldn’t be denied and the various attempts to have the show taken off air fortunately failed.

Milligan’s struggles for recognition and recurring mental illness were painful to witness and although you left the theatre buoyed up by the humour and exuberance of the show, reinforced by a cheerful concluding song, you could not but help having a heavy heart for the tortured genius that was Spike Milligan.

If Hislop and Newman’s intention was to throw a spotlight on the damage that intransigence can cause, then they have succeeded.

• SPIKE runs at The Watermill in Bagnor until March 5. For tickets, call the box office on 01635 46044 or visit www.watermill.org.uk