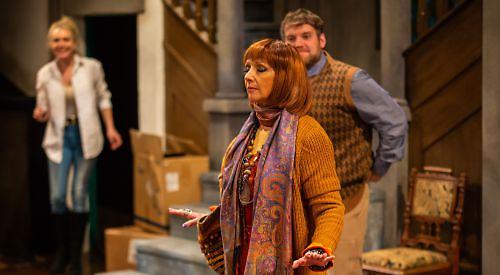 THERE are ominous rumbling sounds in the house (but it’s only the water pipes).

Doors open and close of their own accord — the wind, surely?

Not to mention the disembodied voice. Oh, hang on, that’s Alexa.

Except that Alexa seems to be developing a mind of her own, speaking when she hasn’t been spoken to, giving unhelpful answers to the question “Who is the grey lady?”

The grey lady is the long-time — very long time — inhabitant of the House on Cold Hill.

This is the title of the new play at the Mill at Sonning, adapted by Shaun McKenna from Peter James’s bestselling book of the same name.

Web designer Ollie (Matt Milburn) and his solicitor wife Caro (Madeleine Knight) and their teenage daughter Jade (Hannah Boyce) have just moved into an old and isolated Sussex mansion, incorporating the remains of a monastery.

It’s their “forever house”, an expression which takes on a sinister extra meaning as this eerie evening unfurls.

But then you would probably guess early on that things are going to go wrong when Ollie declares he’s “the luckiest man in the world”.

The rising costs of dealing with the rising damp are the least of the family’s worries.

There’s the geeky Chris (Dan Buckley) and the dippy ex-hippy Annie (Debbie McGee) with their firm belief in the malign spirit, the “grey lady”, which has done for every previous occupier of Cold Hill House.

In a modern spin, this “grey lady” seems to be a dab hand at tech, able to manipulate Alexa, interfere with web designs and intrude on the teen daughter’s FaceTime.

It transpires that none of the previous owners of Cold Hill has lived beyond their 40th birthday and, by coincidence, Ollie is going to hit that landmark in a couple of days. Local vicar (Harry Gostelow) wants to swerve their questions while handyman Phil (Kevin Hand) is unable to fix the flickering lights and spectral images playing across a stage set designed by Alex Marker as a full-blown homage to Hammer horror.

Under director Keith Myers, the cast bring conviction to a sequence of increasingly baffling and frightening events, ingeniously evoked through sound and light effects by Graham Weymouth.

At one point things threaten to get a bit Scooby Doo when it seems that there might be a rational explanation for all those bumps in the night.

Don’t worry, though, the grey lady is real.

So, too, is the creeping unease which is instilled in the audience by their visit to the House on Cold Hill.